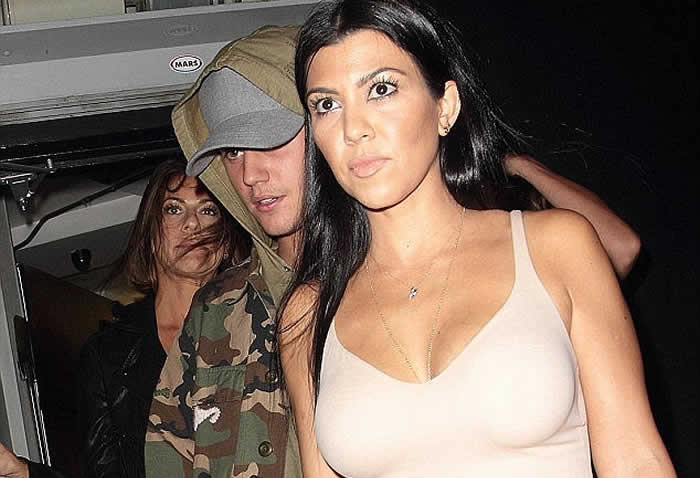 Pop star Justin Bieber has joked that Kourtney Kardashian ”used” him when they were romantically linked last month. The 21-year-old pop sensation sparked rumours he was dating the 36-year-old beauty late last year after he was spotted dining out with the ‘Keeping Up With the Kardashians’ star but has good-naturedly shrugged off the speculation.

Quizzed on US radio programme ‘The Bert Show’ about his relationship with Kourtney – who split from long-term boyfriend Scott Disick last summer – he quipped: ”I’m being used, man. What can I say?”

And asked if they are an item, the ‘Sorry’ hitmaker teased: ”Nah, we’ll leave it at that.” However, the ‘What Do You Mean’ singer admitted he thinks Kourtney – who has children Mason, six, Penelope, three, and Reign, 12 months, with Scott – is ”great” but insisted they are just friends.

He added: ”No, no, but for real, she’s great. I’ve known [the family] for years.” Elsewhere during the interview – which took place on December 17 but airs today (06.01.15) – Justin branded male model Christopher Mason a ”chump” following his appearance in ex-girlfriend Selena Gomez’s steamy new music video for ‘Hands to Myself’. He said:

”What is she trying to do to my heart right now? I’m just kidding. She loves me. I love her, too, always. Who’s this guy? He’s a joke! This guy’s a chump… ”Nah, I guess he’s pretty handsome actually. I can’t even lie.”

The ‘Believe’ hitmaker – who is now dating Hailey Baldwin – admitted he and Selena initially talked about getting back together ”one day” when they split in 2014, but they are now too different for a relationship to work. He said: ”I just want her to be happy. I love [Selena]. We’re friends still. We needed time to grow for ourselves and we were like, ‘Maybe we’ll come back together in the future,’ and then it ended up being so long and we just grew apart and we’re not the same people anymore.”