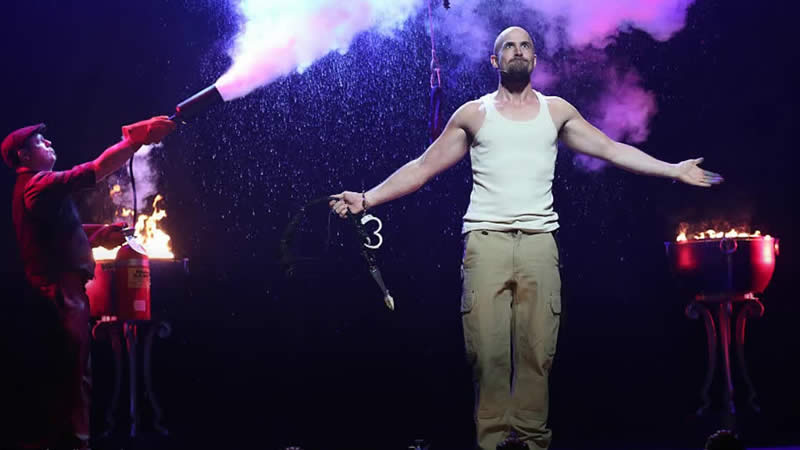 NBC has temporarily stopped production on America’s Got Talent: Extreme, a spinoff of AGT, after a daredevil/escape artist was hurt while rehearsing a stunt for the show on Thursday.

Jonathan Goodwin, a stuntman, was transported to a local hospital with unknown injuries after a stunt went wrong, TMZ reported on Friday.

Per The Sun, the show was filming at the Atlanta Motor Speedway.

“Our thoughts and prayers remain with Jonathan Goodwin and his family as he continues to recover from his accident on Thursday. In order to focus on the wellbeing of our crew, we will be temporarily pausing production on America’s Got Talent: Extreme and will resume the last few days of filming at a later date. The health and safety of our cast and crew continue to be our priority,” an AGT production spokesperson said in a statement to EW.

On Sunday evening, an NBC representative did not respond to EW’s request for comment.

TMZ shared shocking and graphic footage, reportedly from the stunt, which showed Goodwin suspended in the air in a straight jacket with two cars hanging parallel on either side.

Goodwin appears to detach himself from a harness above him as the action begins, but the cars reach each other before he can clear them on what appears to be a drop, trapping him between them. After the vehicles collide, there is an explosion.

The stunt performer slid to the ground and injured his head after the crash, according to TMZ, which did not provide a video of the fall.

A spokeswoman for AGT confirmed to EW on Friday that Goodwin was harmed in the crash.

“During a rehearsal last evening for America’s Got Talent: Extreme, an accident occurred in which escape artist Jonathan Goodwin was injured while performing his act,” the spokesperson for the show told EW in a statement. “He was responsive and was immediately taken to the hospital, where he is continuing to receive medical care. Our thoughts and prayers go out to him and his family as we await further updates on his condition.”

After outlining how the operation had gone wrong, a caller on a 911 recording acquired by Britain’s The Sun sought “rescue and a helicopter.” The 911 operator indicated that they were aware of the incident but requested more information about the patient from the caller.

“He’s about a 40-year-old white male. He fell about 40 feet. He missed the airbag. Landed on his head,” the caller said, adding that the victim, who was not identified during the call, was “agonal” (great distress) and “posturing” (the body making rigid movements).

The caller also said that the sufferer appeared to have a “neural” (nervous system) injury.

America’s Got Talent: Extreme was created to showcase spectacular and jaw-dropping actions that were deemed too magnificent for a theatre stage. Contestants compete for a $500,000 reward on it. Simon Cowell, WWE superstar Nikki Bella, and professional motocross and rally car driver Travis Pastrana are among the judges. Terry Crews is hosting it.

The show’s premiere date has yet to be confirmed.