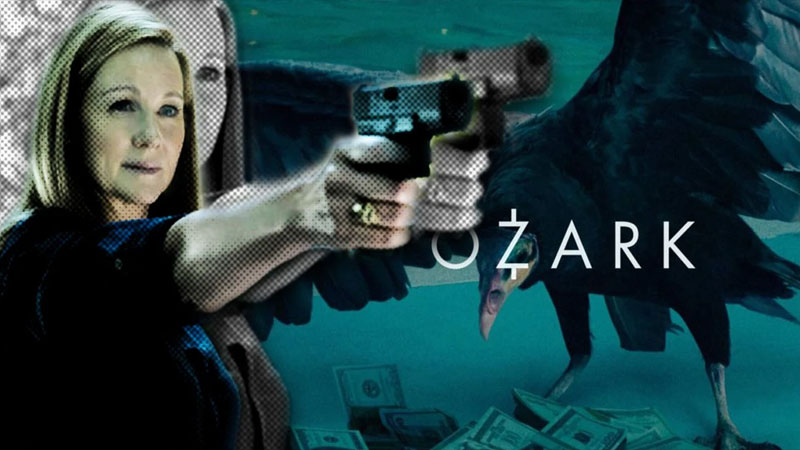 Ozark dropped its third season back in March and fans have spent the last two months waiting to hear whether the gripping Netflix show will be returning.

Jason Bateman (Arrested Development) and Laura Linney (The Big C) star as a married couple, forced to uproot their lives and family to the mountainous Ozarks after a money laundering scheme goes drastically wrong. Far from laying low, Marty (Bateman) quickly gets involved with local criminals and begins preparing an even bigger scheme, one that puts their lives on the line.

There’s reason to be optimistic, given that viewing figures surged for Ozark in series three despite the two year wait, leaving many fans – old and new – left looking for answers: will Marty and Wendy outrun their enemies? Will they take a deal with the FBI or will their luck run out?

Will there be a season 4 of Ozark?

Nothing has been officially announced by Netflix just yet, but the streaming giant would be foolish to kill off such a popular drama – especially as it sounds like the team behind Ozark are up for making more. Jason Bateman, who plays Marty, told Collider in April that the Ozark team are hopeful that a fourth season will happen.

“There is not an official pickup for Season 4,” the actor said, in an interview. “We’re all operating under the hope it will happen. It’s Netflix’s norm to wait for a show to premiere and collect the data for weeks two, three, and four and see if there’s an audience there to justify an additional season.

“So, I guess we’re in that period right now. But, I know [showrunner] Chris Mundy and his team are hard at work figuring out what that fourth season would be if that official pick-up lands.” Mundy has previously said that, if all goes to plan, Ozark should run for around five seasons – although it sounds like there’s some flexibility on the exact number.

“We’ve always talked about it as five seasons,” he said during a panel discussion with The Hollywood Reporter. “It could be four, it could be seven… but that always seemed like a good number to us.” And although he didn’t yet have a specific overall ending in mind, he explained: “We’re building little things in, if we keep on track for the emotional ending we’re guessing we’ll have.”

When will season 4 of Ozark be released on Netflix?

If season four is commissioned, we may have quite some time to wait before its available to stream on Netflix. Season one came out in July 2017, followed by season two in August 2018. Season three took a little longer to make, launching on 27th March 2020; by that measure, in normal times, RadioTimes.com predicts we could be looking at a fourth season in mid to late 2021.

In April, Jason Bateman told Collider that each season requires four months of writing and six months of production, adding: “I think the fastest we can turn around a full season, from starting the writes room to having Netflix push it out, is basically 12 months. There’s just no way to do it any quicker.”

But of course, these are a far cry from normal times and the television industry has been hugely affected by the coronavirus pandemic, which has stalled production on virtually every major drama series that had been due to film.

UK broadcasters have recently drawn up guidelines for filming during the COVID-19 crisis and it’s safe to assume the US will implement its own measures soon enough, given the sheer amount of television produced in the country.

What happened in Ozark season 3?

As we’ve come to expect from the drama, season three managed to pack an awful lot of action into its ten-episode run. The series saw Marty taken captive by crime boss Omar Navarro (Felix Solis), while things weren’t any rosier for Wendy who was forced to put a hit out on her own brother in a bid to save the rest of her family from the wrath of the cartel.

Meanwhile the series also saw the Ruth grow increasingly unhappy with her connection to the Byrdes – eventually seeing her join with Darlene and agree a deal with the KC Mob.

What will happen in season 4 of Ozark?

The end of season three saw Marty and Wendy Byrde working more closely with the Navarro cartel than ever, after crime boss Omar Navarro announced that this was the beginning of increased cooperation between the three of them. The Byrdes had won Navarro over by working (briefly) with the FBI to end the gang war by bringing down the rival Lagunas cartel.

We also expect to see more on Ruth and her decision to cut ties with the Byrdes – how will things work out for her, Darlene and the KC Mob? Season four may also look at Wendy’s decision to let her brother Ben die and what affect this might have on her and the rest of her family – particularly Jonah Byrde who took his uncle’s death badly.

It remains to be seen what would happen in season four, but there are plenty of unfinished storylines to pick back up! The show’s lead writer Craig Mundy said: “I think it will be about if the Byrdes can they turn the biggest mistake of their lives into this huge advantage, and how much will karma catch up with them if they do?”

Did Helen die in Ozark?

That’s right, Ben wasn’t the only character to meet an untimely end in season four, as Helen Pierce was murdered by Navarro right in front of the Byrdes. The cartel lawyer had wanted Marty and Wendy dead so that she could take over their business, making her one of Ozark’s most threatening antagonists – that is, until she was unexpectedly shot in the head in Mexico.

While casting has yet to be confirmed, we can make a good stab at predicting which core Ozark cast members will return – based mainly on who’s still alive. Jason Bateman leads the cast of Ozark as Marty Byrde, with Laura Linney as Wendy Byrde. We can also expect to see more of their daughter Charlotte (Sofia Hublitz) and son Jonah (Skylar Gaertner).

We won’t, of course, be seeing any more of Helen Piece (Janet McTeer) after Omar had her killed; nor will we see more of Ben Davis (Tom Pelphrey) after his untimely death or Marty and Wendy’s therapist Sue (Marylouise Burke) who met a similar grisly fate.

Where is Ozark filmed?

The drama is set around Lake of the Ozarks in Missouri – but not much of it is actually filmed there. Much of the filming takes place around Atlanta, Georgia, where the production team makes use of Lake Allatoona and Lake Lanier

Review of movie “Pain and Gain”