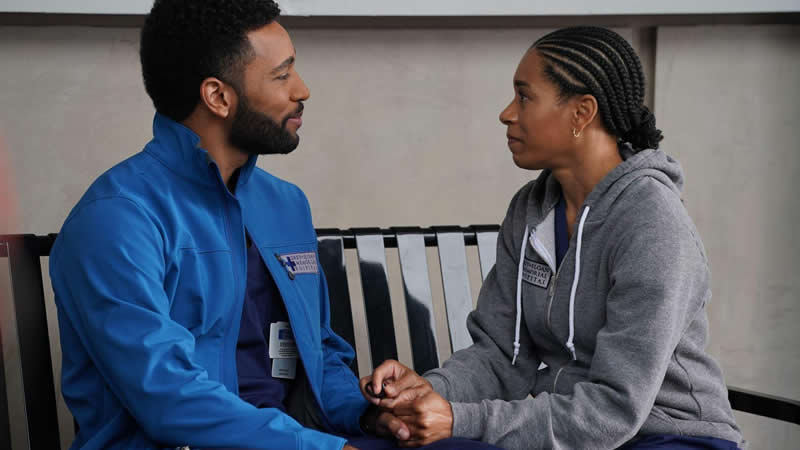 This post contains spoilers from Thursday’s episode of Grey’s Anatomy.

During Thursday’s episode of the ABC medical drama, the doctors of Grey Sloan Memorial worked to save the lives of patients injured during a peaceful protest in support of Black Lives Matter while one of their own experienced racial profiling at the hands of law enforcement.

“We were marching peacefully,” Richard Webber told Jackson Avery (Jesse Williams) as they tended to an elderly protester who was injured by a tear gas canister administered by police. “She was marching peacefully. Can you imagine firing poison gas at this woman? Still marching at her age.”

“What was it out there?” Jackson asked.

“It was beautiful,” said Richard. “First, it was frightening and it was messy but it was still beautiful. There were young people handing out water and masks. It was organized. There was a feeling in the air. You have to put yourself on the line to be part of it. But good trouble lights you up.”

Meanwhile, Maggie Pierce’s new fiancé Dr. Winston Ndugu (Anthony Hill) was on his way to officially move to Seattle — but his road trip was interrupted after suddenly being stopped by police.

“Music off, hat off, hands on the wheel,” a visibly nervous Winston said as the police officer approached his car. While Maggie (Kelly McCreary) was on speakerphone with her future husband, Winston asked the officer, “Can you tell me you why you pulled me over?”

“Winston are you there? I can’t hear anything,” Maggie said as she listened to Winston’s interaction with the officer.

“I’m going to need to turn off your phone, sir,” the officer said.

“Are you failing to comply?” the officer responded.

As Winston hung up the phone, Maggie began to panic and questioned her fiancé’s safety.

Later in the episode, Winston called Maggie to inform her that he was safe, but was overwhelmed and shaken up by his experience.

“Why?” Maggie asked. “Were you swerving on the road?”

“No, my bike rack was obscuring my license plate and then they saw me,” he said. “It turned into one of those things, I guess. Maggie, I’m a little bit shaken up right now. I don’t know if I’m good to drive yet. I’m not good. I’m not okay yet. I’ve just got to breathe.”

At the end of the episode, and as Meredith Grey (Ellen Pompeo) continued her long battle with COVID-19, Richard reflected on the emotionally exhausting series of events.

“Now every day I take a new oath,” he said in a voiceover. “I pledge to help build a world worth living in. And never stop believing that world can exist. Not today. So far from today. But someday.”