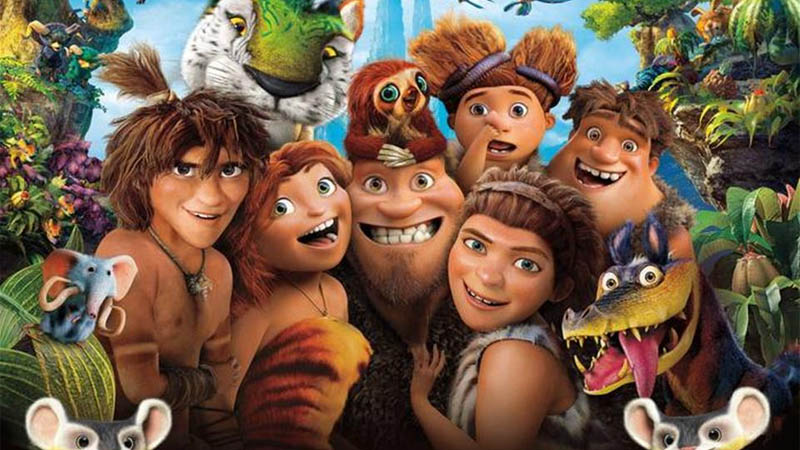 Thanksgiving is traditionally one of the most popular times to go to the movies. Crowd pleasers like “Frozen,” “Coco” and “Knives Out” have propelled attendance and generated many, many millions in ticket sales over the holiday weekend in years past, cementing various box office records to boot.

This year, studios and movie theater owners are settling for scraps.

Only one new movie, Universal and DreamWorks’ “The Croods: A New Age,” was released in theatres. The animated sequel to 2013’s unexpected hit “The Croods” surpassed expectations, generating $9.71 million over the weekend and $14.22 million since opening on Wednesday. While that’s considered a success in the age of coronavirus, it’s the lowest Thanksgiving haul in modern history.

“This level of business is a far cry from typical Thanksgiving weekend releases, but success and failure in the middle of a pandemic should be viewed in relative terms,” says Shawn Robbins, chief analyst at Box Office Pro.

To Robbins’ point, past holiday hits were able to play in more than 4,000 theaters nationwide. With the majority of multiplexes closed, including those in major markets like New York and Los Angeles, “The Croods 2” could only screen in 2,211 venues. Theaters have continued to shutter en masse as COVID-19 cases surge across the country, leaving only 38% of North American cinemas still open for business, according to Comscore.

“To do the kind of business we’re doing under what is obviously a very difficult theatrical landscape is very gratifying,” says Universal’s president of domestic distribution Jim Orr.

Even with significant limitations, “The Croods 2” is eyeing a pandemic-era record. Final tallies are usually reported on Monday. If estimates hold, “The Croods: A New Age” would eclipse “Tenet” for the biggest opening weekend since movie theaters reopened. Christopher Nolan’s latest grossed $9.35 million in its first three days of release.

“For this film to outperform expectations in a less-than-half operational market indicates that moviegoers, especially families, miss the big screen experience and are seeking it out where safe and possible to do so,” Robbins says. “The industry still has a challenging road ahead through winter. But ‘Croods” debut is a preliminary sign of the resilience cinemas can show in the long run.”

“The Croods 2,” which received positive reviews, benefitted as one of the few new releases targeting family crowds. Audiences awarded the film with an “A” CinemaScore. Joel Crawford directed the sequel, featuring a voice cast of Nicolas Cage, Emma Stone and Ryan Reynolds.

Overseas, “The Croods 2” amassed $20.8 million from seven international markets for a global tally of $35 million. China alone accounted for $19.2 million of weekend earnings.

Universal, compared to rivals, has been active in releasing movies during the pandemic. As a result, four of this weekend’s top five movies at the domestic box office belong to Universal or its specialty label, Focus Features. The reason that Universal has been more willing than others to usher out new content is because the studio forged unprecedented deals with AMC Theatres and Cinemark, two of the country’s biggest movie theater chains, to shorten the theatrical window and bring movies more quickly to the home. Typically, movies play exclusively in theaters for 75 to 90 days before they move to online rental services. But under Universal and AMC’s new agreement, the studio can put new films on premium video-on-demand within weeks of their theatrical debuts. In return, the cinema circuits are expected to get a cut of the digital profits. “The Croods: A New Age” is scheduled to land on home entertainment in time for Christmas.

“The release plan for ‘Croods’ struck the perfect balance by not only serving the purpose of supplying cinemas with a brand-new piece of content, but it also will give those consumers without access to a movie theater the chance to see the film in December with their families at home and not feel left out of the equation,” says Paul Dergarabedian, a senior media analyst with Comscore.

“The Croods: A New Age” was the only movie to surpass $1 million in ticket sales this weekend. Body-swap horror movie “Freaky,” also from Universal, landed in second place with $770,000. In total, the R-rated thriller has made $7 million in three weeks.

Meanwhile, 101 Studios’ “The War With Grandpa” has shown rare staying power even two months after its debut. The family comedy — starring Robert De Niro — secured the No. 3 spot with $643,936, boosting its total to a surprisingly strong $17.2 million.

“Let Him Go” and “Come Play,” both from Focus Features, rounded out the top five. “Let Him Go,” a suspense drama starring Kevin Costner and Diane Lane, brought in $453,000 over the weekend. After four weeks in theaters, the movie has made $8.7 million. Falling not far behind, the thriller “Come Play” scraped together $387,000 between Friday and Sunday for a domestic tally of $8.7 million.

Elsewhere, “Tenet” crossed the $300 million mark at the international box office. In North America, however, ticket sales have been less than stellar. The Warner Bros. sci-fi epic has generated $57.4 million to date in the U.S. and Canada, the best results yet for a new movie during the pandemic. But that figure pales in comparison to what Nolan’s films typically earn — and what Warners was hoping a $200 million-budgeted film would make in theaters.

So it’s not entirely surprising that Warner Bros. opted to take a different route with “Wonder Woman 1984,” the studio’s highly anticipated superhero adventure that’s slated for Christmas Day. The Gal Gadot-led “Wonder Woman” sequel will still debut in theaters on Dec. 25. But it is landing on the subscription streaming service HBO Max on the same day — a decision that would have been unthinkable before the pandemic. But now, movie theaters are just grateful for the opportunity to showcase “Wonder Woman 1984” at all.

The coronavirus outbreak has been catastrophic to those in the business of showing movies on the big screen. There’s no denying the film industry will look very different when the world emerges from the global health crisis, though many industry experts are optimistic that moviegoing will survive.

“After everything the business has been through, and still has to get through, it has not been easy to see light at the end of the tunnel,” says David A. Gross, who runs the movie consulting firm Franchise Entertainment Research. “The lowest points may still be ahead. But the pandemic will get under control and this calamity will pass.”

Norm of the North’: Film Review

I don’t know How She Does it