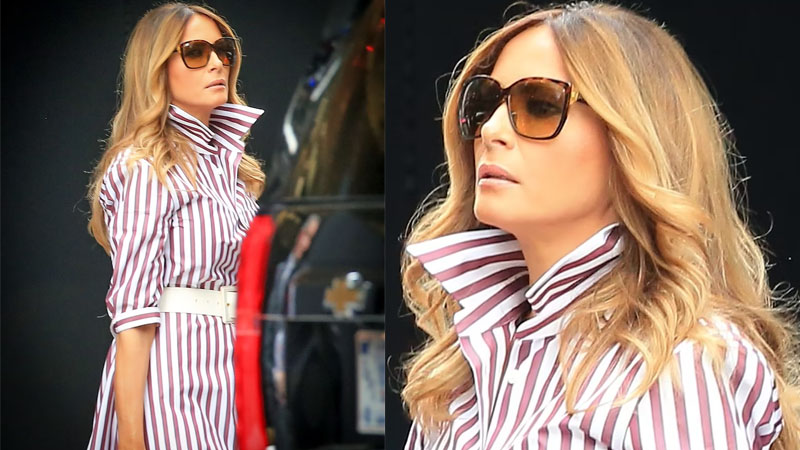 Former First Lady Melania Trump was snapped looking uncomfortable as she was heckled while leaving Trump Tower in Manhattan on Saturday.

Leaving her husband’s Fifth Avenue skyscraper and returning to the Trumps Bedminster golf resort in New Jersey, where the former first family spends their summers, Melania, 52, was captured on camera.

Despite being closely associated with his home of New York, Donald Trump, Melania, and the family’s kids now overwhelmingly prefer the more socially conservative climate of Florida over the famously liberal Big Apple.

Melania entered the waiting Secret Service cars while flaunting her flawless and youthful skin. She was dressed in a maroon and white striped button-down dress and brown sunglasses.

Tourists paused to marvel as they observed a lot of activity outside Trump Tower in Midtown Manhattan at the coveted Fifth Avenue address.

As she boarded one of the waiting SUVs, Melania, who has maintained a fairly low profile since her husband left office in January 2021, seemed anxious.

In the sweltering summer heat of New York City, she kept the sleeves of her dress rolled up. On Saturday, the temperature remained around 90F.  Her face was set by waves of beautiful, highlighted brown hair.

Some people shouted offensive remarks toward her as she walked past the crowd to get into her car.

Since her husband’s presidency ended last year, Melania has kept a relatively low profile and withdrawn significantly from the public eye.

In contrast to her husband, who has continued to hold rallies across the nation, she has only occasionally been spotted at events.

Melania, who is said to care for her 16-year-old son Barron while also living a life of leisure at her family’s Mar-a-Lago country club in West Palm Beach, Florida, has been the subject of prior reports.

The former first lady was guarded as she stepped out of her car and entered the premises by Secret Service agents wearing blue suits, sunglasses, and earpieces.

She may have been in New York City because former President Donald Trump is rumored to be playing golf at his estate in Bedminster, New Jersey. The Big Apple is only a little over an hour away.

Since leaving the White House in January of last year, the couple has been residing at Trump’s Mar-a-Lago club in Palm Beach, Florida, but they frequently leave their primary house there for New Jersey when the summer heat becomes unbearable.

Melania came under fire this week after her former chief of staff Stephanie Grisham posted a screenshot of what appeared to be a text message exchange between the two of them on Twitter. In the text, Melania is seen declining to condemn the violence that broke out at the Capitol on January 6 after her husband’s supporters broke into the building.

‘Do you want to tweet that peaceful protests are the right of every American, but there is no place for lawlessness and violence?’ Stephanie asked Melania in the texts, to which the first lady allegedly replied, ‘No.’

I’ll Take Your Questions Now: Stephanie previously described this exchange with Melania in her book. What I Saw in the Trump White House,” detailing the events that led to her resignation.

She asserted that Melania was taking pictures of some of the White House’s rugs when the pro-Trump crowd broke into the Capitol and described Melania’s response as “dismissive, defeated, and detached.”

‘It broke me,’ she wrote in the book. ‘I took a breath and waited another minute. You learned to do that in the Trump White House: make sure you are grounded and not acting out of the moment. Then I resigned.

‘I sent her an email and cc-ed her senior adviser so I couldn’t take it back or be talked out of it. I was done.’

After the hearings about the riot on January 6, 25-year-old former White House aide Cassidy Hutchinson revealed that Trump had intended to join his supporters at the Capitol. Stephanie later told CNN that Cassidy’s testimony compelled her to release the text because it provided a lot of contexts.

‘Knowing Melania as I did, I was so disappointed and discouraged and sickened that she wouldn’t stand up and just say simply there should be no violence,’ she added.