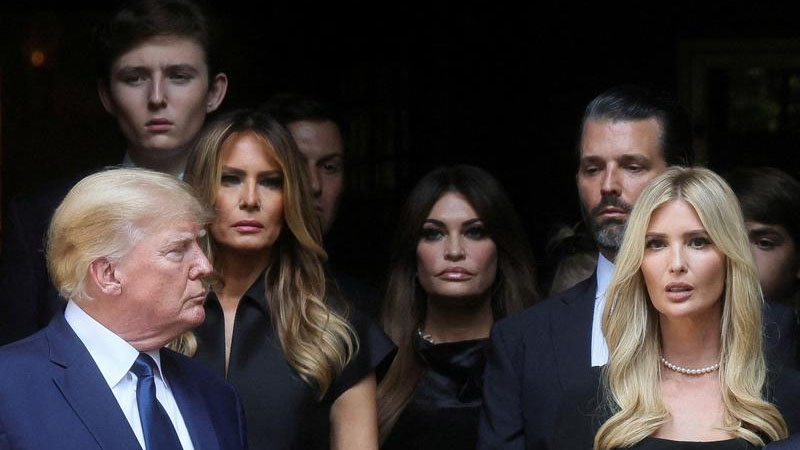 After traveling to New York City together, Melania, who didn’t always get along with Donald’s first wife, joined the former president for the memorial service on Wednesday.

The current spouse of Donald Trump, Melania Trump, confirmed to PEOPLE that she, her husband, and their son, Barron, attended Ivana Trump’s funeral Mass on Wednesday.

Although the former first lady, 52, and her husband’s first wife, 73, did not always get along in the years prior to her death but appear to have shown up in support of Donald and his older children by attending the New York City service.

Talk of tension between the two Trump wives first arose in 2017, when Ivana said in an interview on Good Morning America that she had a direct line to Donald at the White House but didn’t want to use it because “Melania is there.”

“I don’t want to cause any kind of jealousy or something like that,” Ivana continued, “because I’m basically the first Trump wife. Okay? I’m the first lady.”

Ivana stated in the same interview that she would choose her freedom above that of the actual first lady and would not trade places with her.

“I think for her to be in Washington must be terrible,” Ivana said. “It’s better her than me. I would hate Washington.”

“Mrs. Trump has made the White House a home for [her son] Barron and the President,” Grisham said of Melania. “She loves living in Washington, DC, and is honored by her role as First Lady of the United States. She plans to use her title and role to help children, not sell books.”

On Monday, Melania and Donald arrived in New York.

As per People, Ivana’s funeral Mass is being held at St. Vincent Ferrer Roman Catholic Church in Manhattan’s Upper East Side, just a short stroll from Ivana’s longtime home, and is being referred to as a “celebration of life” on the exclusive invitation.

Tiffany Trump, the daughter of Donald and Marla Maples, also attended the service in support of her family.

Prince Harry Treated US in His UN Speech the Same Disrespectful Way He Treated His Family in Recent Years: Piers Morgan