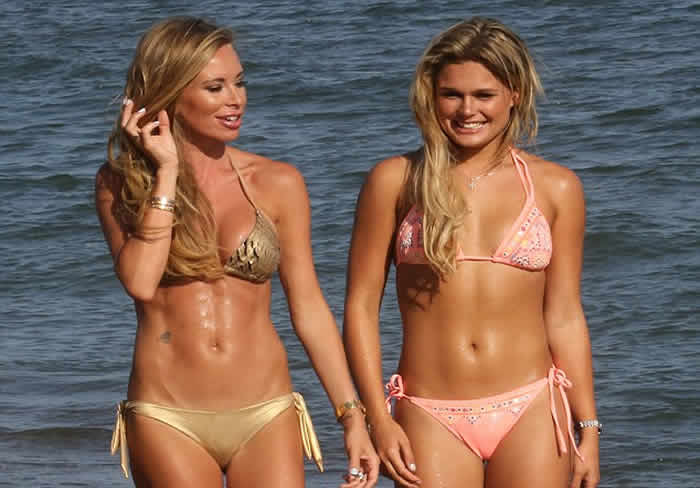 Natalie Richardson co-star Alex Weaver show off their hot bikini, When it comes to sun, sea and sand it doesn’t get much better for the stars of Life On Marbs.

Natalie Richardson and her co-star Alex Weaver were clearly in their element as they made the most of the gorgeous weather at the La Cabana beach club in Costa del Sol. 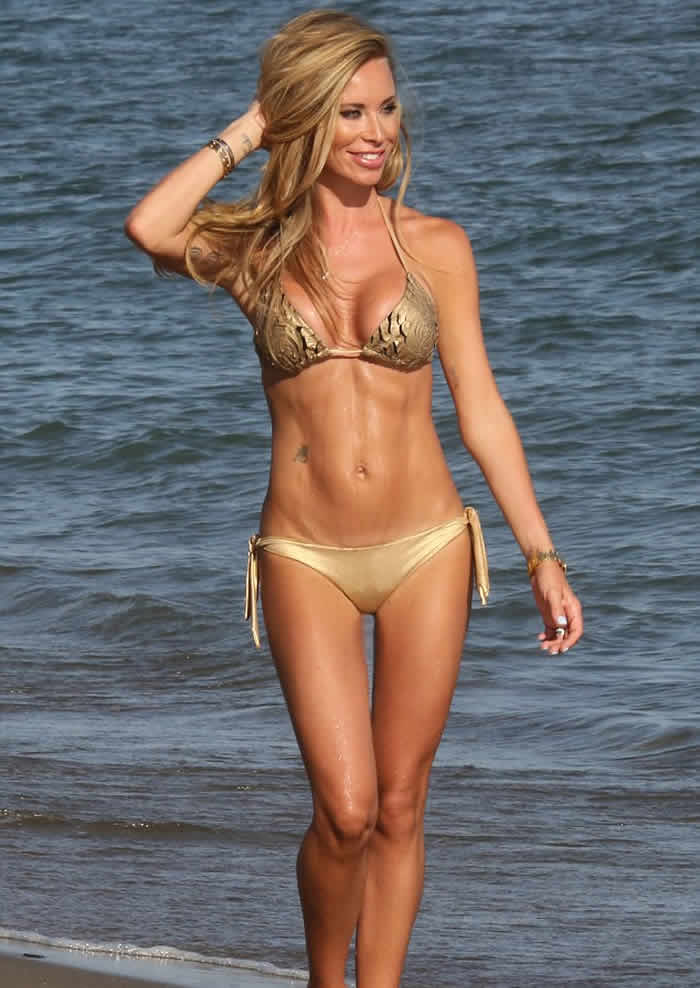 True to form, 32-year-old Natalie jumped at the opportunity to showcase her lithe physique and pulled a number of sultry poses as she dipped her feet in the sea. The mother-of-two put on a busty display in a gold bikini which perfectly complemented her toned abs and slender legs.

She tied her metallic bikini bottoms up at the side and teamed them with a black and gold bikini top which beautifully complemented her briefs. The glamour model-turned-housewife, who reportedly counts Leonardo DiCaprio and Calum Best among her exes, wore her long blonde hair in loose waves. 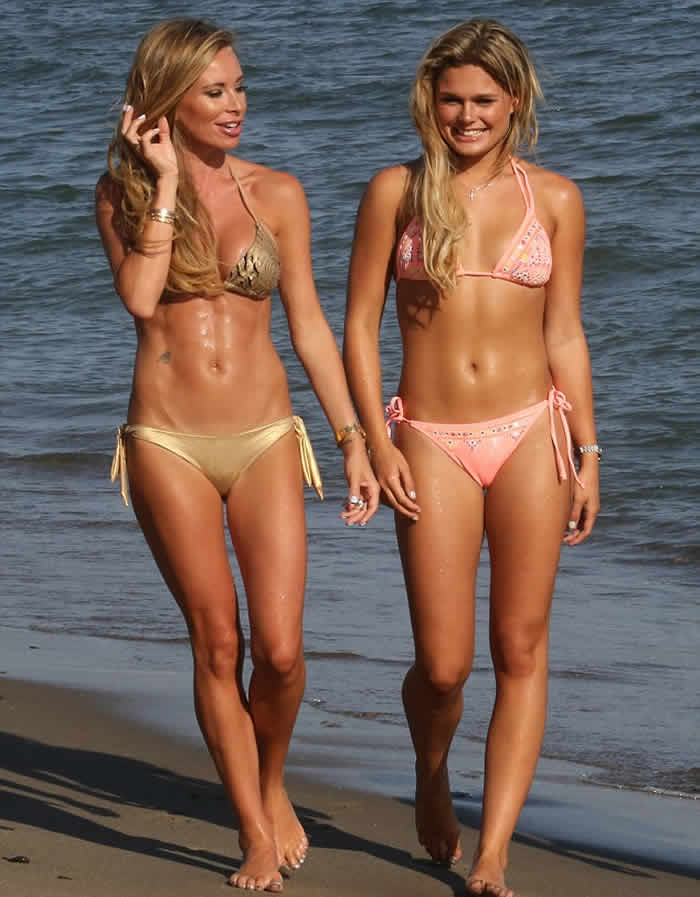 She gently pulled her tresses around over her right shoulder as she cooled down with her friend in the water. She added some further sparkle to her beach look with several gold bangles and an expensive-looking wrist watch.

Always keen to look her best Natalie, who says she’s like a ‘rabid Chihuahua’ when she’s angry, wore a full face of make-up and added some further oomph to her pout with lashings of lip gloss. She highlighted her chiselled cheekbones with some bronzer and opted for shimmery eyeshadow for her day at the beach. 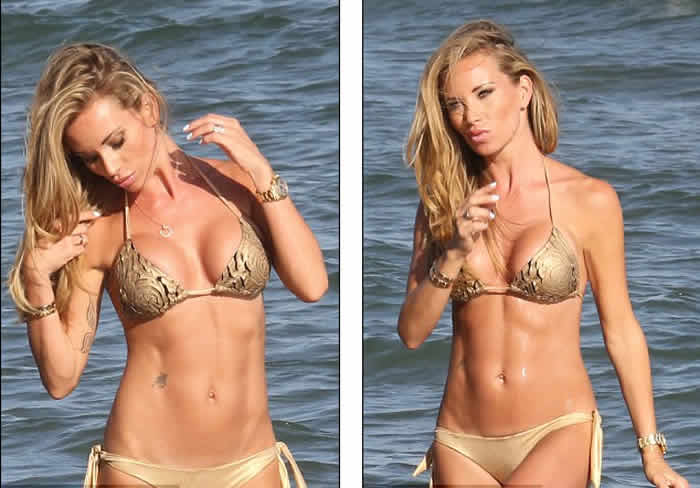 Nineteen-year-old Alex, whose godmother is Patsy Palmer, cut an equally impressive figure in a coral, gem encrusted two-piece. The teenager wore her beach hair loose around her shoulders and at one point pulled it out of her face when it caught in the wind.

The pair looked happy and care-free as they frolicked on the beach together. Their relaxation time comes after yet another explosive episode of Life On Marbs which saw Alex go head-to-head with Marbella’s ‘ultimate playboy’ Jeff Graham. Alex was clearly shocked by his retort, and began to well up, saying: 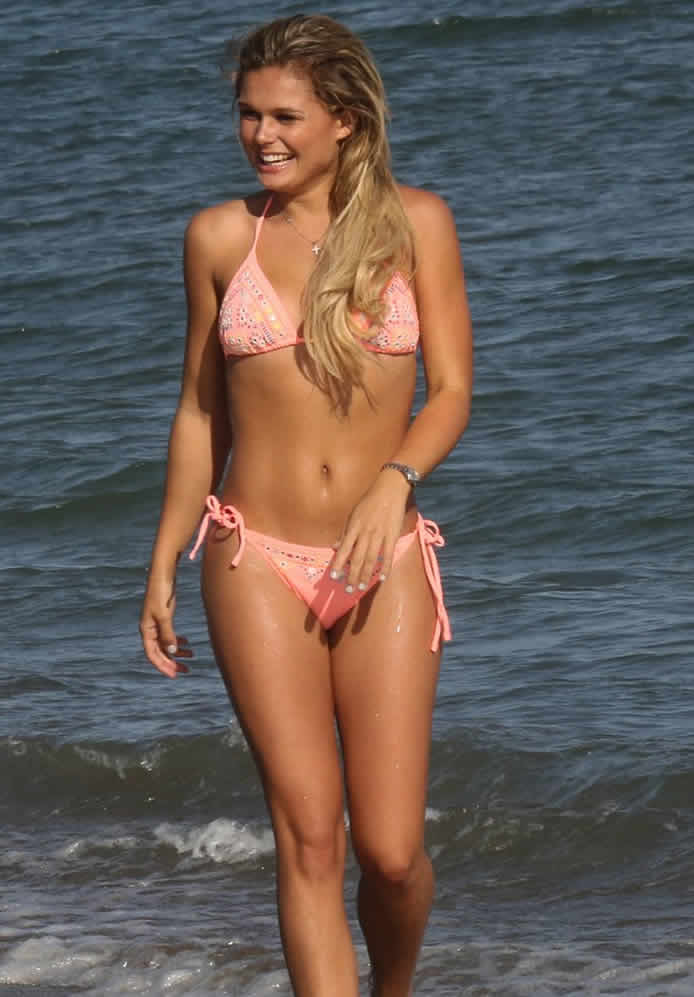 ‘You’re a f**king a**ehole, I’m getting upset.’ ‘Get upset,’ a relentless Jeff quipped: ‘You just attacked me like a vicious rottweiler. I’m not going to lower myself.

You’re a tramp.’ Jordan decided to take the lead and removed Alex – who couldn’t resist getting some sort of revenge by throwing her rose over Jeff. Obviously fuming, the privileged public school boy – who doesn’t currently work – vented: ‘Don’t bring peasants around me, I’ll pay her to leave Marbella.’ 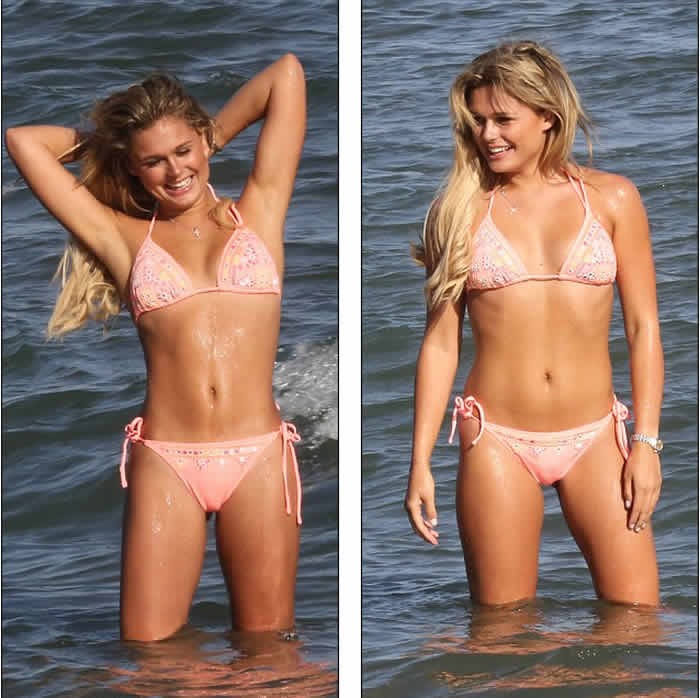 Angelina Jolie Slaps Brad Pitt in the Face in By the Sea Trailer—Watch Now!