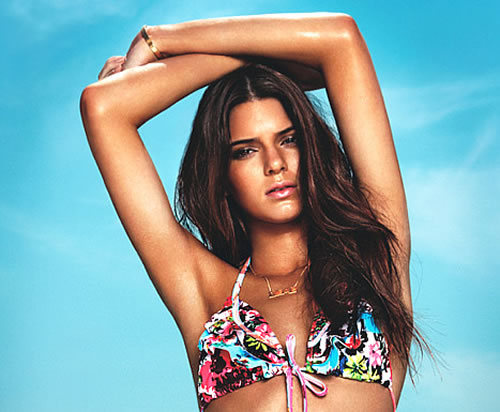 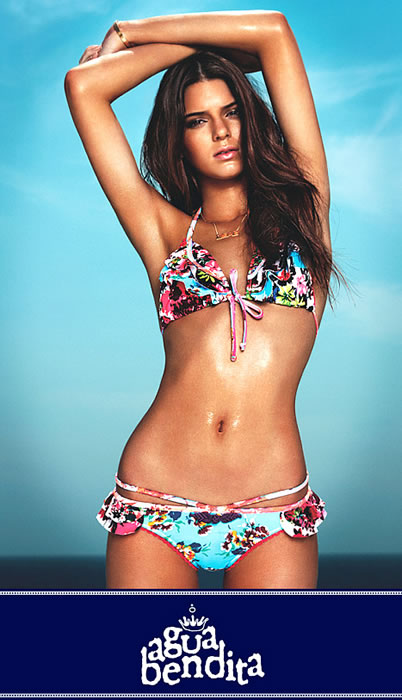 Kendall Jenner is one step closer to her dream job. Just weeks after revealing her desire to model for Victoria’s Secret someday, the 17-year-old reality star is appearing in a swimsuit campaign for Agua Bendita — which counts VS Angel Candice Swanepoel among its beauties. In a newly released image from her recent photo shoot with the brand, the Keeping Up With the Kardashians star shows off her toned, tanned physique in a bright, floral bikini adorned with ruffles. Her long brown hair is in loose, beachy waves, and she’s wearing a gold necklace that says “I [Heart] AB” — the same gold necklace Swanepoel sports in other images for the company.

Having already graced the pages of Paper magazine, Teen Vogue, and Seventeen, Jenner is well on her way to a successful modeling career. Appearing alongside Swanepoel for Agua Bendita will surely raise her profile even more — which is good, since she has her sights set on earning her wings as a Victoria’s Secret Angel. “It’s always been kind of a dream of mine,” she told E! News in April of being linked to the iconic lingerie company. “It’s a very great thing to do, and it’s something I’d love to do.”

In the meantime, Jenner is working to build up her own brand — and her own self-confidence. “I’m constantly criticized for being too skinny,” she told Harper’s Bazaar Arabia in March. “I’m trying to gain weight, but my body won’t let it happen. What people don’t understand is that calling someone too skinny is the same as calling someone too fat. It’s not a nice feeling.”

The slender star also told the mag she hopes to carve out an identity for herself separate from that of her famous family. “I’m trying my best with what I want to do, which is modeling,” she said. “I think I’m on my own career path and I don’t really care what other people have to say about me being in the spotlight of my sisters. I’m just doing my own thing.” – Usmagazine