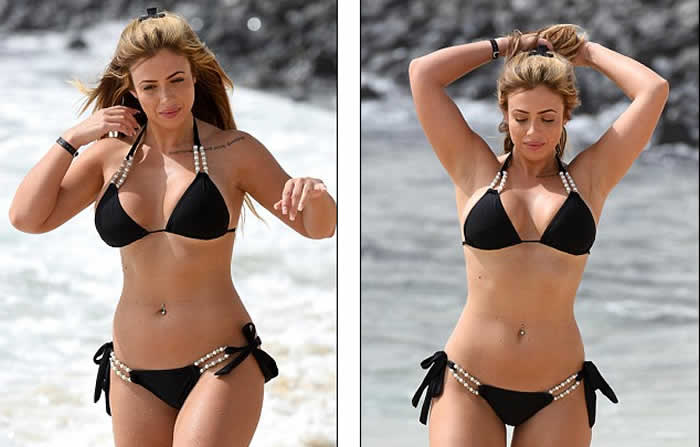 It’s getting to that time of year when most people are forgetting about honing their bikini bodies, opting to become a little more relaxed with themselves.

But for Geordie Shore beauty Holly Hagan, it’s still all about how good she looks in a swimsuit, and she showed off her stunning curves while enjoying a beach holiday in Cape Verde recently. 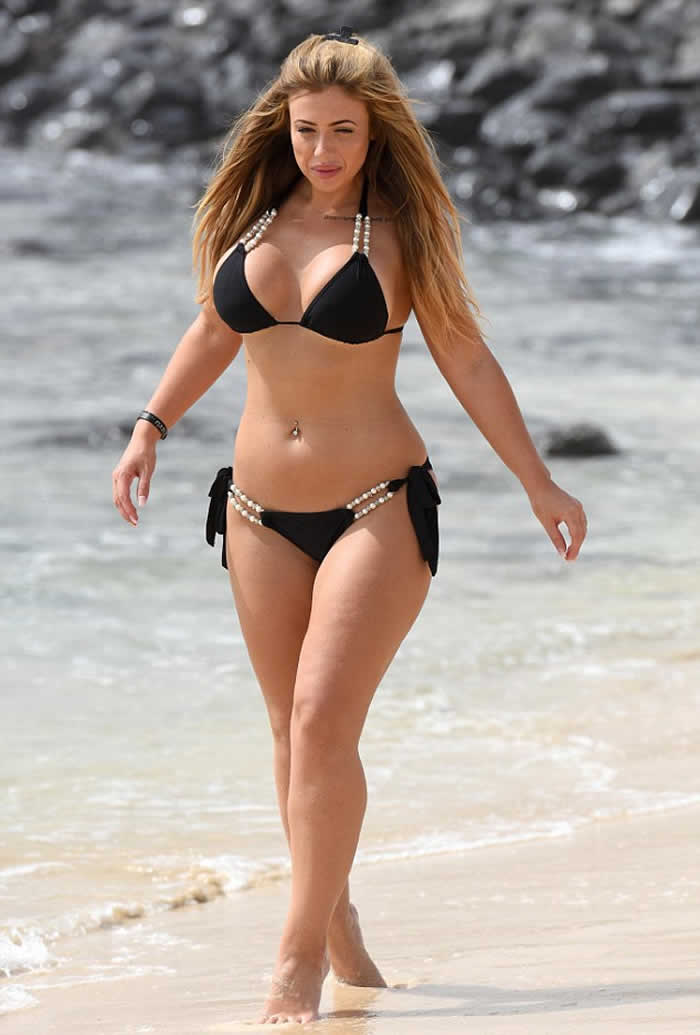 The 23-year-old reality TV favourite made the most of her buxom curves as she rocked a tiny two-piece pearl-string bikini while enjoying a solo day on the beach while at The Resort Group’s Melia Dunas Hotel in Sal on the beautiful island.

The halter-style bikini supported Holly’s assets, hoiking them up, and the high-cut pearly briefs allowed her to show off her gym-honed, feminine thighs. She kept her long, brown-blonde locks loose for the day, clearly unfazed by the soaring temperatures, letting it tumble over her bare shoulders. 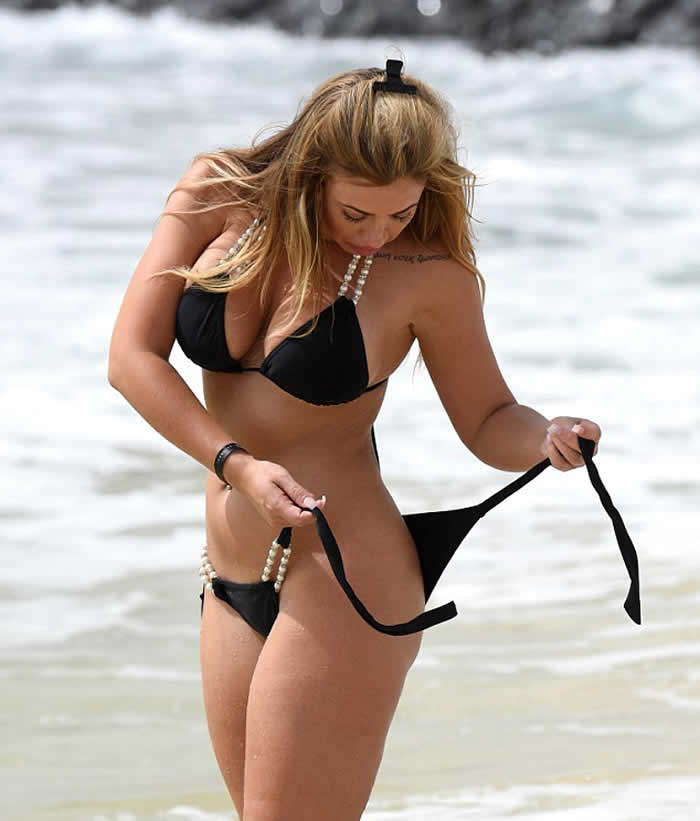 And, not one to rest on her beauty laurels, she had a face full of make-up, oozing that high-maintenance Geordie Shore aesthetic she and her co-stars have become known for. As well as taking a sexy sashay up the beach, showing off the results of her gruelling fitness regime and healthy lifestyle – which has seen her drop four dress sizes, going from a 16 to a slim 8 – she also took a dip in the sea.

But it went slightly awry when a huge wave knocked her over in the shallow water, the star hilariously crying out in surprise. 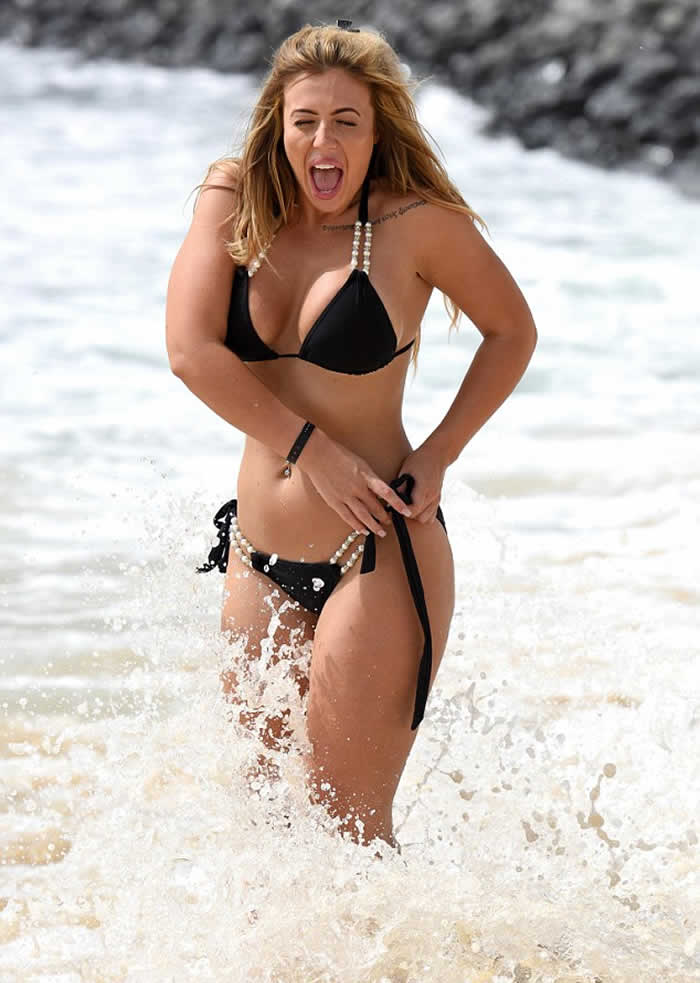 Luckily, her surgically-enhanced breasts remained within their bikini constraint as she fell to the sand. She did seem to come into a spot of bother with her tiny briefs, though, as she was forced to undo the unique pearl ‘strap’ and re-tie it, to make sure her modesty was safely covered.

Read More: Kesha Shows Off her Bikini Body While Posing in Hawaii

And, although there’s no denying the star looks amazing for sticking to a stringent diet and fitness plan, after being much heavier when she rose to fame on the hit TV series three years ago, fans took to Twitter to air their concerns over her new diet tome. 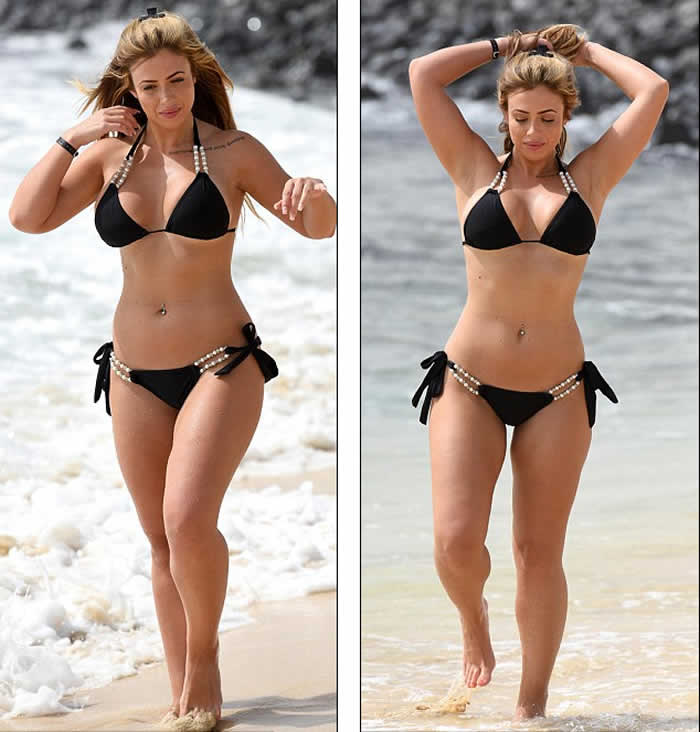 However, a spokesperson for the star has since told MailOnline: ‘On the first page of the Lose 5 Pounds In 1 Week book, it states that the diet contains general information about nutrition and diets, that the information in the book is not advice and should not be treated as such.

‘Also in the book, it says that the plan is designed to be followed for seven days, without starvation, supplements, or cutting out entire food groups. It is designed so be about small sacrifices for a week, combined with specific techniques. ‘The plan is also versatile for different people and is not designed to be a strict one-size-fits-all regime, for example boys are recommended in the book to consume more than 800 calories per day. 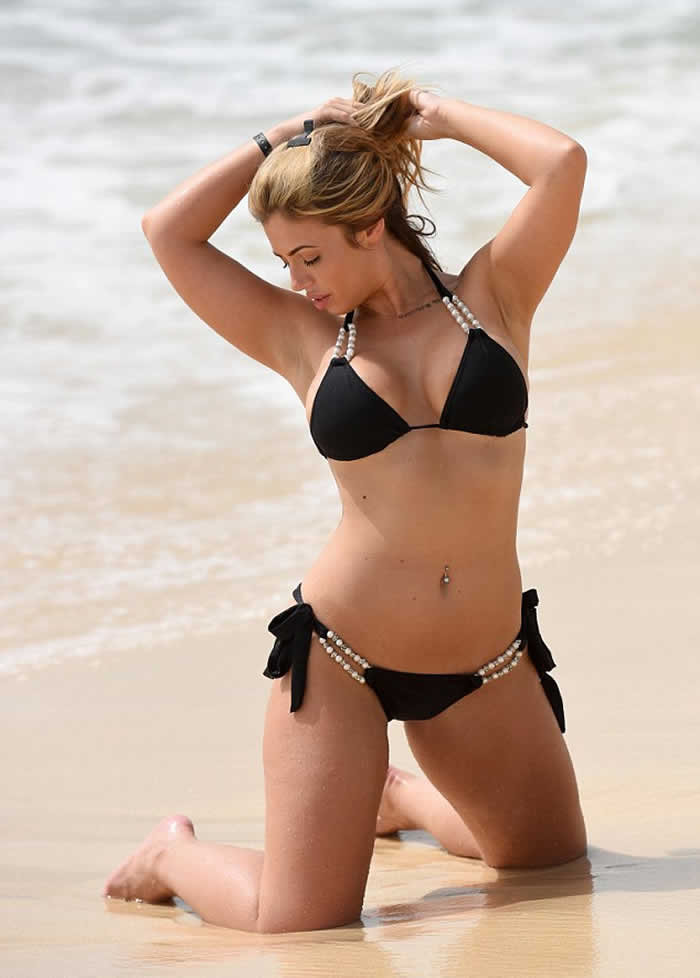