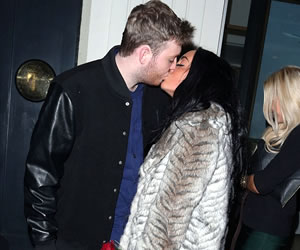 He may have said he thought he was too ugly to be a star but James Arthur’s fans certainly don’t agree with him as he was spotted passionately kissing a mystery brunette outside Mahiki. The 24-year-old, who said he spent many of his teenage years locked in his bedroom playing the guitar, may be making up for lost time as he romanced the fake-tanned fur-coated stunner on the pavement in central London, before moving in for a kiss.

Heartthrob James, who is hotly tipped to win this year’s show, didn’t even need to serenade the mystery woman with his soft toned voice, as he merely grabbed a rose and shoved it in her hand. It must be a whirlwind for the soft-voiced youngster who admitted that his music has made him more confident. And he was certainly riding on the coat tails of success as he was surrounded by attractive females outside the club, but he plumped for the slim brunette and after buying her a rose he was spotted getting into a waiting car, a far cry from the days when he used to wait for the bus. For James, who has taken to Twitter asking his fans to step and vote for him to make sure he gets into the final, it was a well earned night out after a long week rehearsing. – Dailymail