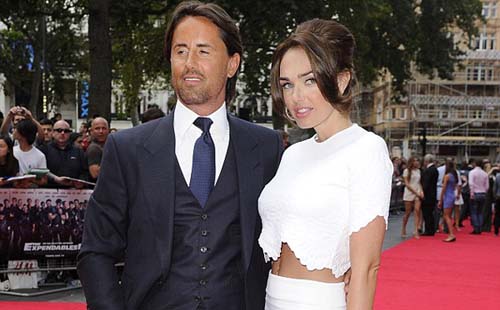 Tamara Ecclestone showed off her ripped ab muscles when she attended The Expendables 3 premiere in London’s Leicester Square on Monday night. But the 30-year-old socialite was in good company as she was surrounded by the movie’s muscly action men, including Sylvester Stallone, Wesley Snipes and Kellan Lutz.

And not to mention Tamara Ecclestone own bit of buff stuff, her husband Jay Rutland, 31. The stunner looked incredible in a plain white crop top which had a scalloped hem and an embossed floral detail. She matched it with a pencil skirt in the same hue and a pair of nude strappy heels which complemented her very chic clutch bag. For a change, the mother-of-one wore her long locks up in a beehive-inspired do which flattered her pretty features.

Businessman Jay Rutland had also pulled out all the stops wearing a gorgeous dark blue three-piece suit, complete with matching tie. The couple wed in an extravagant ceremony in June 2013. The three-day celebrations at the Grand-Hotel du Cap-Ferrat are reported to have cost a whopping £7million and saw live performances from Mariah Carey and Sir Elton John.

In the third instalment on the highly successful franchise, Barney (Stallone) and the rest of the Expendables come into conflict with ruthless arms dealer Conrad Stone banks. The Expendables’ co-founder, played by Mel Gibson, is determined to destroy the team. Meanwhile, 59-year-old Bruce Willis will not be starring in the third movie after he and Stallone fell out last year. Sylvester claimed he was ‘greedy and lazy’ on Twitter, after Willis reportedly demanded more money for a four-day shoot for The Expendables 3. -dailymail