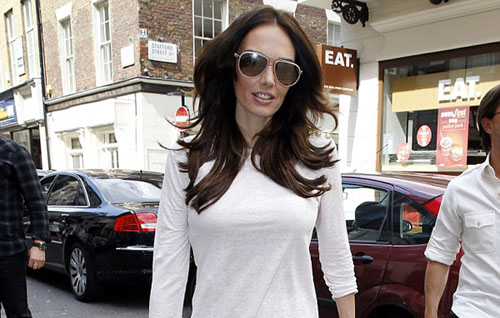 She loves to wear a little bod ycon number when she goes on dinner dates with husband Jay Rutland, but on Sunday, Tamara Ecclestone was more than happy to dress down a little. The 29-year-old socialite headed to the Dover Street Arts Club for lunch with her man and looked lovely in a faded pair of light coloured jeans which were ripped at the knee.

Teaming them with a simple white T-shirt top, the pretty brunette put a superstar spin on her ensemble with a pair of sky high heels and a designer handbag. Her locks were perfectly blow-dried and have become quite a talking point with hairdresser to the stars, Nicky Clarke tweeting: ‘WE LOVE: Socialite Tam Ecclestone sporting barrel waves out and about last night in London wearing World McQueen.’

She also threw a pair of designer shades into the mix and was sporting a red manicure which gave her look a splash of colour.  Husband Jay Rutland, 31, looked smart in a white shirt, blue trousers and black shoes. The pair were not pictured with their two-month-old daughter Sophia, no doubt enjoying some quality time together. Tamara Ecclestone is rarely seen in the same outfit twice and she is more than happy to poke fun at her love of shopping.

Taking to Twitter on Sunday, she posted the words: ‘I could give up shopping but I’m not a quitter.’ The couple spent Saturday evening watching the boxing match between Carl Froch and George Groves at Wembley Stadium. Other celebrities ringside included Gordon Ramsay, Mr Selfridge star Jeremy Piven, Daniel Craig, East Enders’ Danny Dyer, football pundit Jamie Red knapp. Tamara Ecclestone was so excited about getting tickets to the match that she even photographed them and then Diagrammed them to her account.

Italian Police adds a Swanky Lamborghini Huracán to its Fleet