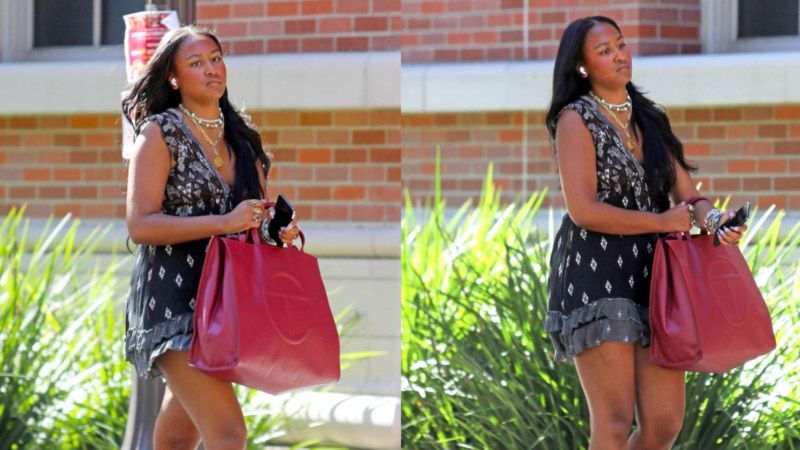 Sasha Obama ruffled some feathers by wearing Telfar’s largest embellished bag in the oxblood colorway, which retails for $275 as a book bag while walking around the University of Southern California’s campus last week.

Many people question the youngest Obama daughter’s style. Still, she’s dressed like any other Gen Z student, strutting to class in a casual black and white, boho-chic, ruffle-trim mini dress, tan boots with black socks, and stacked necklaces to match her red bag.

The outrage over the student carrying the “not for you, for everyone” bag on campus is perplexing, especially since the largest-size Telfer has a compartment just for laptops and is large enough to fit other bulky textbooks to be carried from class to class.

Many owners of the all-inclusive Telfar bag sell out quickly. It’s difficult to believe that the USC senior is the only one on campus flaunting their Telfeezy.

The Rickey Smiley Morning Show deconstructed the controversy surrounding Obama’s bag choice, which still didn’t seem like valid arguments over a modern-day bag that could very well be used as a book bag.

Gary With Da Tea, one of the hosts, stated that the Telfar bag enraged viewers and that even if President Obama was still in office, she shouldn’t have used it.

“Everybody has a nice bag. She can’t have a nice bag to carry her books in?” Da Brat said. “Even if her dad was still in office, Sasha should be able to sport her fashion style without scrutiny.”

The other morning show hosts agreed with Da Brat about white children wearing whatever they want when their parent is in office and not being scrutinized.

On social media, supporters have come to the student’s defense, according to ACESHOWBIZ.

“How else are you supposed to carry textbooks? I carried mine in Gucci,” one person tweeted.

“It’s her money. Let her spend.” A third fan told internet trolls to min their own pockets, tweeting, “Please leave her a long let her live her life, it’s her [money],” another person scolded critics.

The Telfar has become a global inclusive bag known as “The Bushwick Birkin,” a “Telfie,” and a “Telfeezy.”