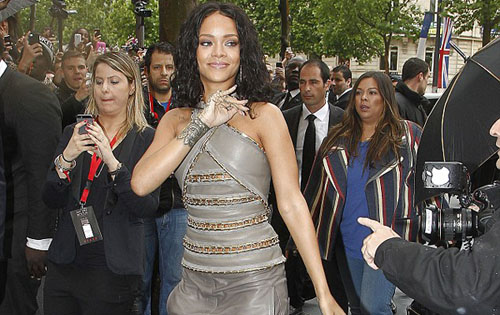 It is known for being a city full of fashion lovers and cutting edge design. And on Wednesday Rihanna decided to embrace Paris fully, wearing an eye-catching and fashion forward ensemble. The 26-year-old, who is in French capital to present her new fragrance, covered up her famous body in the cargo trouser and top combo.

The singer’s top had an almost bandage effect to it and featured chain detail, which revealed glimpses of her skin beneath. While it was very tight on her body, she opted for loose fitting grey cargo trousers – perhaps a new take on Kanye West’s leather joggers. Rihanna completed her look wearing her hair loose around her shoulder in gentle waves and she kept her make-up on the natural side – creating a dewy feel.

The star looked in good spirits as she made her way to the Sephora store on the Champs-Élysées avenue to present her new poster Rogue. The fragrance hit headlines this week as the poster for it has been restricted to areas where children are unlikely to see it because of its ‘sexually suggestive’ image of the pop star. The poster featured an image of the singer sitting on the floor with her head and shoulders leaning against a wall and her legs raised against a large bottle of perfume.

One person complained that the ad was offensive because it was overly sexual and demeaning to women and featured a  ‘sexualised and provocative’ image which was inappropriate for children to see. Parlux Fragrances said they had received no other complaints, adding that Rihanna was known for her provocative songs and persona, which the ad sought to capture without featuring improper nudity or offensive, suggestive or demeaning imagery.

The company believed the majority of women would not consider the portrayal of Rihanna to be demeaning, but rather she was depicted as being in a position of power, as indicated by the name Rogue, which suggested ‘one with the courage to challenge boundaries’. The Advertising Standards Authority (ASA) noted that the image showed Rihanna mainly covered, and she was depicted looking directly at the viewer with a facial expression ‘of defiance rather than vulnerability’.

Kim Kardashian Shows off her Bra and Underwear