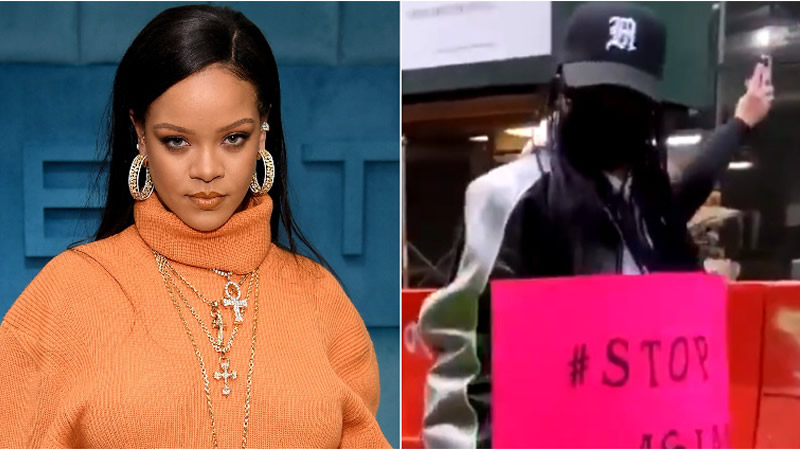 Rihanna is joining the fight against anti-Asian hate crimes. The songstress and fashion designer took to the streets to add her voice to the rally cry in New York City on Sunday.

The “Diamonds” songstress turned up with her assistant, Tina Truong, and joined the #StopAsianHate march.

As seen in photos shared by Truong, and others at the event, Rihanna went incognito with long braids, a ballcap and a black face mask. She stayed warm in a black jacket and dark jeans.

During the event, the singer got into the spirit of the activist movement, as she used markers to help make protest signs and walked through the streets chanting with the crowd.

Truong shared a slideshow of photos and videos from the event, which gave fans a glimpse of Rihanna’s protesting, and served as encouragement for others to join the cause.

“This is what solidarity looks like! #stopaapihate #stopasianhate #callitahatecrime,” Truong wrote.

As Rihanna stayed low-key at the event, many fellow protestors didn’t even realize it was her.

One fan captured a moment in which a protestor asked for her Instagram handle after having marched with her, only to be stunned when he found out who she actually was.

There has been a dramatic rise in anti-Asian hate crimes and attacks against the AAPI communities in the United States over the past year, with drastic increases in physical and verbal attacks across the country.

Numerous celebrities have called for legal intervention and public support, while raising awareness of the increase in hate crimes.

This video is unavailable because we were unable to load a message from our sponsors.

If you are using ad-blocking software, please disable it and reload the page.

Woods serves up laugh ahead of Masters Champions Dinner