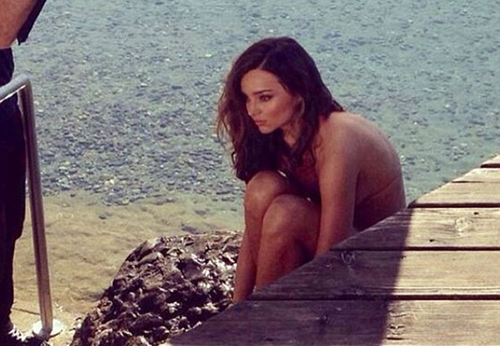 Miranda Kerr sure is a natural when it comes to posing at the beach. The Australian model positively sizzles in designer swimwear as she covers the May issue of Elle Spain. And the former Victoria’s Secret Angel’s bronzed skin is enough to make you want to book a holiday, as she strikes a series of sexy poses inside the magazine.

Miranda Kerr poses like a mermaid on a rock and showing off her slender frame in a teeny-tiny gold bikini. But inside the mag the heat is definitely turned up, as she flaunts her long legs in leopard print high-waisted swimming shorts and a miniscule animal print bikini. In the sultry photographs, captured by fashion snapper Xavi Gordo and styled by Inmaculada Jimenez, her brown and golden hair is soft and tousled for a perfect beach look.

The pictures were taken on the shores of Lake Lucerne in Switzerland and Elle Spain hails Miranda Kerr a worthy heir of 90s supermodels such as Cindy Crawford and Claudia Schiffer. The 31-year-old goes braless in a white string vest crop top, coupled with white bikini bottoms, highlighting her impressive tan which was either created by the world’s best spray tan artist or some serious time in the sun.

In one shot she pulls the side of her coffee coloured swimming costume up to reveal the type of slim hips that Miley Cyrus would be proud of. And in another she lies on the beach’s dark pebbles in a long-sleeved black mesh costume, her eyes looking strikingly blue. Miranda Kerr dishes out her tips for the perfect summer body in the issue. Last week she revealed how she stays calm when she’s so in demand as a model and with her three-year-old son Flynn to look after. -dailymail

Matt Rutler Not Charged With DUI