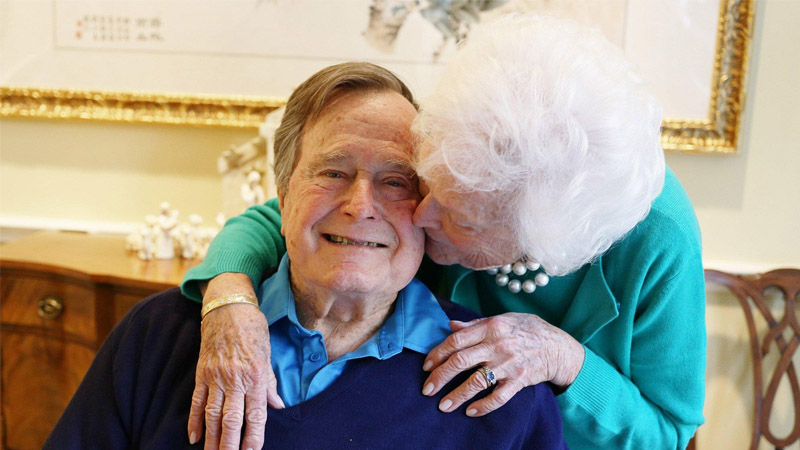 Much has been written about the presidency of the late George H. W. Bush. But in her new memoir, The Man I Knew, Jean Becker — Bush’s chief of staff for a quarter century — zooms in on the 25 years that came after his time in office.

“One of the reasons why I wrote the book is I really felt the American people, when he left the White House, still didn’t really understand who this man was,” Becker, 65, tells PEOPLE. “He was a bigger-than-life person, smart, funny and had a heart as big as Texas. Until the day he died, he never stopped thinking of ways to try to make a difference.”

In the days immediately after Bush’s presidency ended in January 1993 — with the sting of his loss to Bill Clinton still fresh — “Mrs. Bush worried about him,” Becker says.

Not yet 70, he faced a question familiar only to other former presidents: What now?

Though he moved back to Houston with plans to retire and largely stay out of the public eye, “retirement was not in his vocabulary,” Becker says.

He took his time figuring out his next steps while adjusting to life outside the West Wing.

“It is enlightening to find out what goes on in the life of a former president,” Becker says. “To go from one day being the leader of the free world to not only losing all power but also a large staff, public housing, a private jet — all of a sudden you don’t have any of that.”

After a couple of months, the “blueprint” for the rest of Bush’s life began to become clearer, Becker says: He began to give paid speeches — which he called “white collar crime” — but also knew how crucial it was to use his role as a former president for good, championing personal causes like cancer research and volunteerism.

“I really became aware as I started writing the book that he really left for the rest of us a blueprint of how to have a life well-lived,” Becker says now. “We all can learn so much from him.”

Revisiting Bush’s years post-White House (decades that Becker spent at his side) shows, she says, “how we all should be living our lives with joy, with purpose, with a servant’s heart.”

Read on for highlights from her memoir, which was published Tuesday.

A Friendship Forms in the Bushes’ Kitchen
Becker had been a newspaper reporter for 10 years when she was assigned to cover the 1988 presidential election for USA Today. An assignment she “wasn’t very excited about but ended up loving” was editing a weekly “Campaign Diary” column written by both candidates’ wives — Barbara Bush and Kitty Dukakis, wife of Democratic nominee Michael Dukakis.

While Becker worked with Dukakis’ press secretary, “I worked directly with Barbara Bush,” she says. The rapport between the future first lady and Becker was so strong that, after then-Vice President Bush won the election, Becker became a deputy press secretary for Mrs. Bush in the East Wing.

After the re-election loss in 1992, she moved to Houston with the Bushes to help Mrs. Bush with her memoir. There was no place in the new office for Becker to sit, so she ended up working from a card table in the Bushes’ kitchen.

“That’s how I got to know him [President Bush],” Becker says. “He’d come in to get coffee or a glass of milk, and there I’d be.” The two became friends, and after Mrs. Bush’s memoir was complete, Becker signed on in 1994 to be President Bush’s chief of staff on a six-month interim basis. She never left.

Office of George Bush From left: Barbara and George H. W. Bush competing in a Segway race in a mock Summer Olympics they staged in 2004. She won.

What Bush Didn’t Want from His Post-Presidency
As Bush was figuring out his next steps early in his post-presidency, he drafted a memo to himself of what he wanted to do (“I want to make enough money so Bar can finish her life without changing her lifestyle” and “I want to do something worthwhile”) — and also what he did not.

On the list? To not cheapen the presidency, try to influence how history would treat him, or — No. 1 on his list — get in the way of President Clinton, a rival with whom he would grow closer over the years.

Bush Was ‘the Father Bill Clinton Never Had’
Becker says that when Ronald Reagan left the White House in 198, he left behind a lighthearted note with a bit of joking advice for his successor: Don’t feed the squirrels.

Four years later, a still-devastated Bush left an unprecedented and well-known note of his own in the top drawer of his desk in the Oval Office, cementing a tradition from president to president that continues today.

In his missive, he told Clinton — a man he barely knew and a man who had just defeated him — “I am rooting hard for you.” A decade later, they forged a friendship in tragedy when they partnered to raise money after a tsunami hit Southeast Asia on Christmas Day 2004.

At then-President George W. Bush’s request, both men set off in February 2005 on a five-day trip across the hardest-hit countries. They left as relative strangers “and came home best friends,” Becker says.

Clinton insisted that the elder Bush — 22 years his senior — take the only bed and bedroom aboard their plane and “throughout the trip, President Clinton graciously waited for [Bush] and helped him up and down stairs, in and out of boats, planes, helicopters, and cars,” Becker writes. “Especially since the staff needed to stay out of the photos, it fell to President Clinton to give him his arm, which he did without being asked.”

For his part, Bush “treated the man who denied him a second term with great respect and kindness. And sometimes like a son,” she continues. “At times he scolded him, especially when President Clinton was running late or when President Bush worried he was maybe talking too much.” Clinton, whose own father died three months before his birth, “became very protective” over Bush, Becker tells PEOPLE.

“It was interesting to watch the two of them,” she says. “Mrs. Bush would tell you President Bush was the father President Clinton never had.” Clinton was delighted when the Bush family –— with 41 the father and 43 the son — began calling him “42.”

Joe Reilly Center, from left: Bill Clinton and George H. W. Bush visit with children in Indonesia during their trip in February 2005 after a tsunami ravaged large parts of Asia.

The Moment He Realized He Wasn’t the Only President Bush
On Inauguration Day in 2001, the elder Bush choked up as he walked into the Oval Office and saw his son for the first time sitting at the desk, signing papers as president of the United States.

The younger Bush’s chief of staff, Andy Card, walked in and said “Mr. President” — and it was the father who “turned around prepared to answer when he realized Andy was talking to the President and not him,” Becker writes.

The ‘Two Georges’: Bush … and Clooney
Famous for saying to Becker, “Jean, I have an idea,” one of his many post-presidential visions was to bring George Clooney — who had played an emergency room doctor on one of the Bushes’ favorite shows, ER — to come with him and Mrs. Bush in late 2006 to present a check to rebuild an emergency room in Cameron, Louisiana, in the wake of Hurricane Rita.

But “what he didn’t get was that Clooney had left the show seven years earlier and was now a huge movie star,” Becker writes. “I then argued that we didn’t know George Clooney; I had no idea how to call George Clooney; and it was likely he was not a fan. His politics were somewhere to the left of President Bush’s.”

Long story short, Clooney accepted the invitation and “the ‘two Georges’ were a huge hit,” Becker writes. “Once again, George Bush had a pretty good idea.”

A Lasting Bond
After more than 70 years together as husband and wife, President and Mrs. Bush were not separated long after she died in April 2018 — and they were “as in love” on the day he said goodbye to her as when they first met.

President Bush almost died of sepsis the day after Mrs. Bush’s funeral in April 2018, Becker says, but “he rallied.”

“We almost lost him that day” she says. He would go on to live just five more months without her.

Even deep into their marriage, when Mrs. Bush heard President Bush approaching, “her instinct was immediately to look into a mirror and pinch her cheeks so they had a little more color,” Becker writes. Both husband and wife complained to her about how much the other snored, but when Becker suggested they sleep in separate rooms, “President Bush was appalled,” she writes, telling her, “Jean, I have to be able to reach out during the night and touch her and make sure she is there.”

Mrs. Bush died with President Bush holding her hand, “which in itself had been a difficult feat,” Becker writes. But he insisted.

“The Bushes’ power was out for three days the day Mrs. Bush died, which meant President Bush could not use the elevator to get to her second-floor bedroom,” Becker writes. “The Secret Service carried him up the stairs. The power came back on about the same time she passed.”

His Final Days
Four days before former President Bush died in November 2018, then-President Barack Obama visited him — and to thank him for his service going all the way back to World War II.

“We all took a lot of flak,” Obama said to him, according to Becker. “But you took it for real.”

Bush loved having someone read to him, and, in his final days, family members and staff did so at his bedside, as well as authors of some of his favorite books. Just a few hours before he died, Becker was at Bush’s bedside, holding his hand.

She got a tickle in her throat and coughed, ever so slightly. “He squeezed my hand and asked ‘Are you okay?’ ” Becker writes. “Those would be the last words George Herbert Walker Bush would say to me.”

It was “just so him,” she continues. “He was dying. But as always, he was thinking of the other guy.”

Vanessa Bryant Looks Glamorous For Star-Studded Night Out in Italy