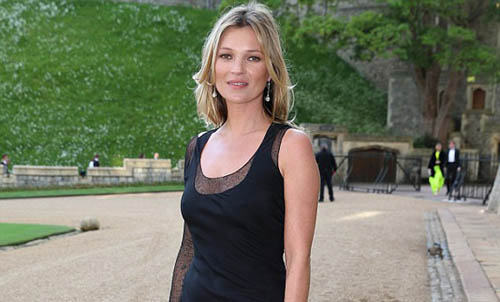 They are two of the most famous faces on the planet. And on Tuesday evening Kate Moss and Cara Delevingne lent themselves to none other than Prince William for the evening as they attended an exclusive charity dinner to celebrate the work of The Royal Marsden sponsored by fashion designer Ralph Lauren at Windsor Caslte.

Despite the 19 year age gap between them Kate Moss and Cara looked equally as stunning as they opted for elegant black gowns – perfect for the regal setting. Kate, who was seen leaving her home with her husband Jamie Hince not long before, looked particularly youthful. The 40-year-old radiated wearing a slinky black dress which featured a thigh-high split and one long sheer sleeve.

Her hair, which was styled with plenty of volume, fell loose and she accessorised with a simple silver box clutch bag. Cara Delevingne 21, also opted for black picking an elegant gown with an intricate beaded bodice and long skirt. The aspiring actress pulled her locks off her face in a severe bun and she wore lashings of dramatic dark make-up. Their arrival was shortly followed by British actress Emma Watson, who once again showed she likes to take fashion risks.

The Harry Potter actress looked older than her years wearing a full grey skirt with a crisp white shirt, with dark lipstick and her hair pulled off her face in a rather old fashioned style. Her one-time co-star Helena Bonham-Carter was also in attendance and looked right at home against the dramatic back-drop of the castle. The 47-year-old stunned wearing a rather extravagant black dress which was strapless, with a very ruffled skirt. Helena wore her hair off her face in an interesting chignon, while her make-up was equally as powerful.

It wasn’t just the most well-established actress’s who attended – stars of the moment Sophie Turner and Lily James were also invited. Game Of Thrones star Sophie had a real princess moment in a one-shoulder black dress with full skirt. Good friends: Once inside the reception Kate Moss and Cara Delevingne spent time chatting to each other, Her peer Lily, who stars in Downton Abbey, wore an incredible beaded and feathered black and silver dress. Guests came from across the globe to celebrate the work of The Royal Marsden, including Cate Blancett and Margot Robbie from Australia.

The actresses pulled out all the stops with their ensembles, showcasing very different styles – Cate went for a simple white dress, while Margo opted for a Seventies glamour vibe in grey with big hair. Prince William is hosting the event to raise awareness of London’s Royal Marsden cancer hospital – one of Princess Diana’s favourite charities. It is expected that most of them will style themselves in Ralph Lauren creations in honour of the sponsor. However, one key royal will not be in attendance as Kate Moss Middleton has turned down the invitation to go along with her husband.

William became president of the Royal Marsden Hospital in 2007 and is keen to enhance his philanthropic profile. His backing for Mr Lauren’s connection with the Marsden will be seen as his picking up the baton from his mother – who was also the hospital’s president. William, who is said to have personally asked the Queen for permission to host the gala dinner, is expected to give a brief welcome and address in which he will thank Mr Lauren for extending his philanthropic work to the Marsden.

Ralph Lauren’s company is the ‘Official Outfitter’ for the Wimbledon tennis championships and his personal association with Prince William, Duke of Cambridge and the Marsden will see him take a further step into the upper reaches of British society. After a three-course dinner, singer Emeli Sande will serenade guests for the finale of the evening. The event wont be as social media friendly as last week’s Met Gala as guests have been warned that security will be tight and have been asked to leave mobile phones and cameras at home. -dailymail