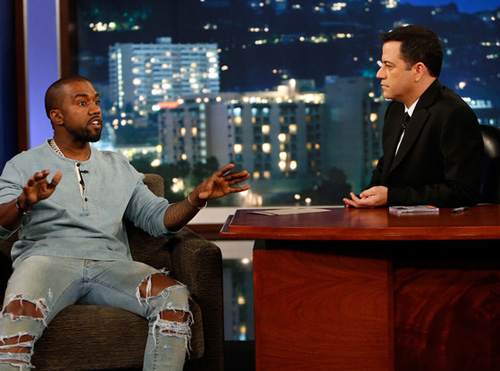 Kanye West had a lot to say when he came face-to-face with Jimmy Kimmel on ABC’s Jimmy Kimmel Live! Wednesday night. Unlike their epic Twitter feud, however, the two behaved like gentlemen as they discussed the rapper’s feelings on fame, family and music. 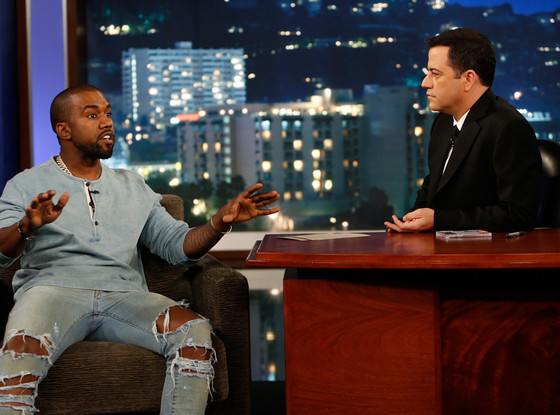 Before West was brought out, Kimmel told the audience, “Tonight you will bear witness to the great Kimmel-West Debate of 2013. The only other time I was ever involved in a rap feud of this magnitude was in 1992 when I accused Sir Mix-A-Lot of only liking medium butts.”

The comedian also denied speculation the Twitter feud was a publicity stunt, similar to the epic twerk fail viral video he created. “I wish I had thought of that. I just didn’t,” Kimmel said. “You know, honestly, I’ve been too busy masterminding the giant prank going on in Washington D.C. right now. That one is going gangbusters.”

On the Oct. 9 show, Kimmel admitted that he’d only watched a portion of West’s BBC Radio 1 interview when he decided to recreate it using child actors. The idea came to him, he said, it because he finds it funny to “see kids curse.”

“I think some people read into it differently, that we were positioning you as a child,” Kimmel, 45, told West, 36. “Which was not the case.”

The “Black Skinhead” rapper—who demanded a public apology from Kimmel in late September—went on to explain the point of his radio interview with BBC Radio 1′s Zane Lowe. “People are too scared of getting spooked in a way,” he said. “Creators get beat up my entire life…I refuse to follow those rules that society has set up and the way that they control people with low self-esteem.”

West said he’s tired of being talked about in the tabloids, and he lashed out at Kimmel because they have a history. “This is the one person I know, so I can go and let out everything that I feel about every single bogus Weekly cover,” he said. “Every single bogus skit…Every person who feels it’s okay to treat celebrities like zoo animals.”

Kimmel defended the hip-hop star, saying, “A lot of people think you are a jerk. I often in my own personal conversations say ‘No. I know this guy. He is not a jerk.’”

The Atlanta-born, Chicago-raised musician also revealed he’s uncomfortable with the idea of being a celebrity. “I’m not running for office, I’m just here to make good music, make people feel good,” he said. “For me, I’m a creative genius and there’s no other way to word it, and I know you’re not supposed to say those things about yourself.”

He added, “I could care less about any of these cameras, in all honesty. All I care about is my family.” (West’s girlfriend and daughter, Kim Kardashian and North, were watching the interview backstage.)

Kimmel once again referenced West’s BBC Radio 1 interview and argued that the rapper calling himself a “creative genius” was “a weird thing to say.” Still, he applauded West’s honesty. “I think that upsets people, but the truth is, a lot of people think that they are geniuses and nobody says it.”

“I’m totally weird,” West acknowledged. “I’m totally honest and I’m totally inappropriate sometimes. For me to say I wasn’t a genius, I would just be lying to you and to myself.”

West has never been known for being humble, and Wednesday’s interview was no exception. “I had an art background even before I was a musician,” he said. “I’m more of a messenger than a rapper.”

He also defended comparing himself to Steve Jobs and Jesus Christ. “I’m saying these are my heroes, these are people I look up to, this is the type of impact I want to make on this earth,” West said. “Exactly what I did in music, I want to apply to product, to education.”

West—who’s had several scuffles with the paparazzi—hopes that the public will focus on his professional accomplishments instead of his personal achievements.

“When people hear my music, they have a good time. And I should be respected as such when I walk down the street,” he said. “Don’t ask me a question about something you saw in the tabloids. Don’t try to antagonize me. Because you know what—it’s not safe for you in this zoo.”

The chat went so long that the night’s musical guest, Arctic Monkeys, was bumped from the show.