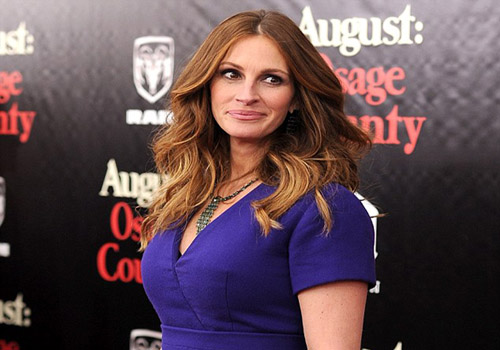 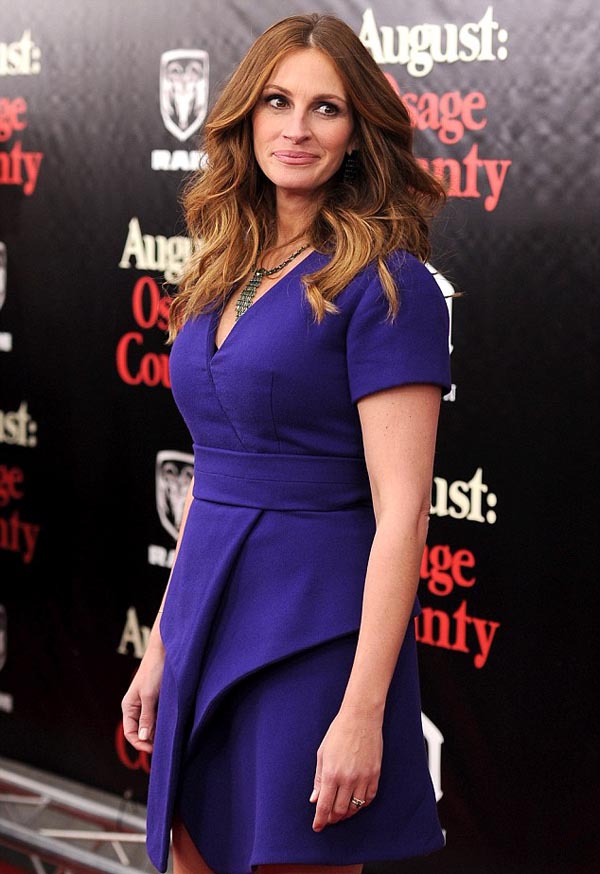 Oscar-winner Julia Roberts has had a fairly quiet few years on the acting front, having scaled back her work schedule to focus on motherhood. 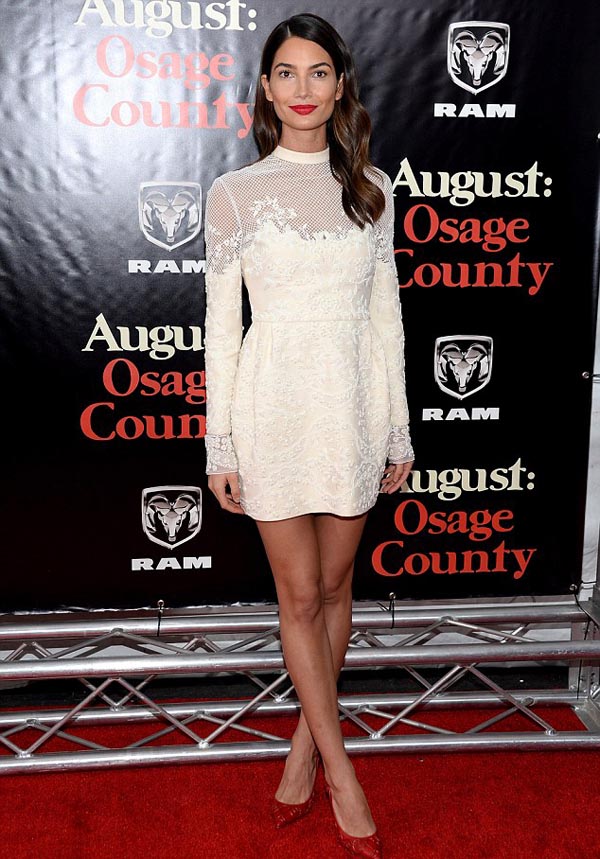 But the mother-of-three proved she’s still go the X factor as she outshone her much-younger counterparts on the red carpet at the New York premiere of her new film, August: Osage County, on Thursday night. The 46-year-old dazzled in a short blue dress that perfectly displayed her seemingly endless toned and tanned legs, despite the plummeting temperature, as she strutted her stuff at the famed Ziegfeld Theater. 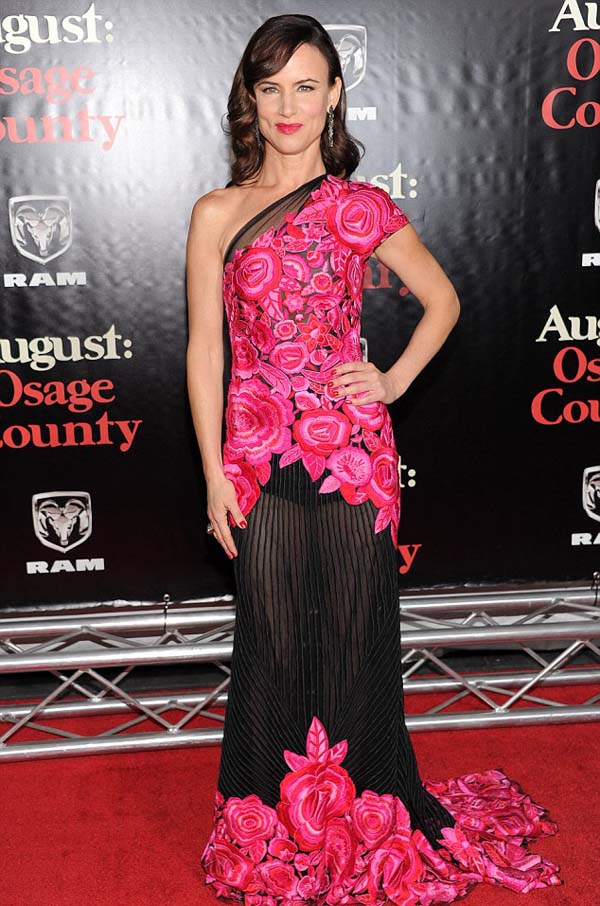 The star appeared slender and in fighting fit form amid unconfirmed rumours she could be expecting her fourth child – though it could be said that her frock’s layered wrap skirt was a good choice for hiding a possible burgeoning baby bump. All eyes were on the statuesque beauty, who looked ravishing in the low-cut number that featured short sleeves, which she teamed with matching blue satin platform stilettos. 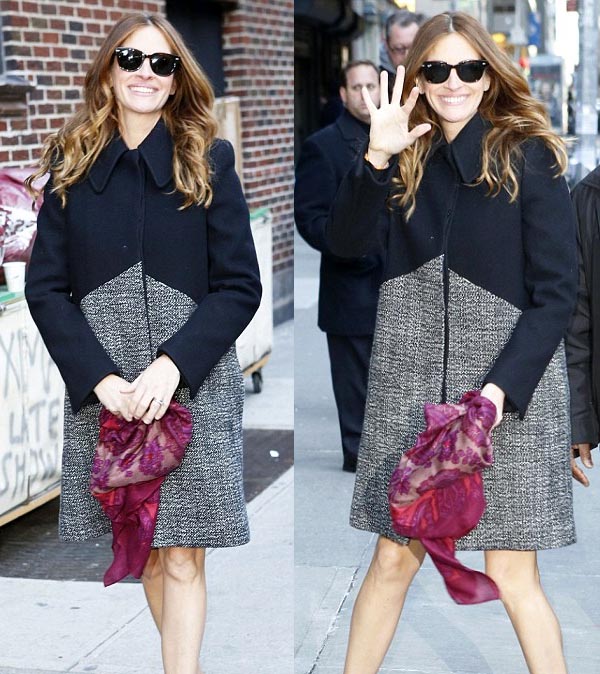 She wore her long chestnut tresses down in soft, voluminous waves and her make-up was picture-perfect and very natural, with her eyes played up with a hint of blue shadow and lashings of black mascara. A contrasting emerald green necklace and earrings and a thin gold bracelet were her only accessories, though she certainly needed little more than her megawatt smile. Julia Roberts posed on the carpet with former My Best Friend’s Wedding co-star Dermot Mulroney, having reunited for this new venture. 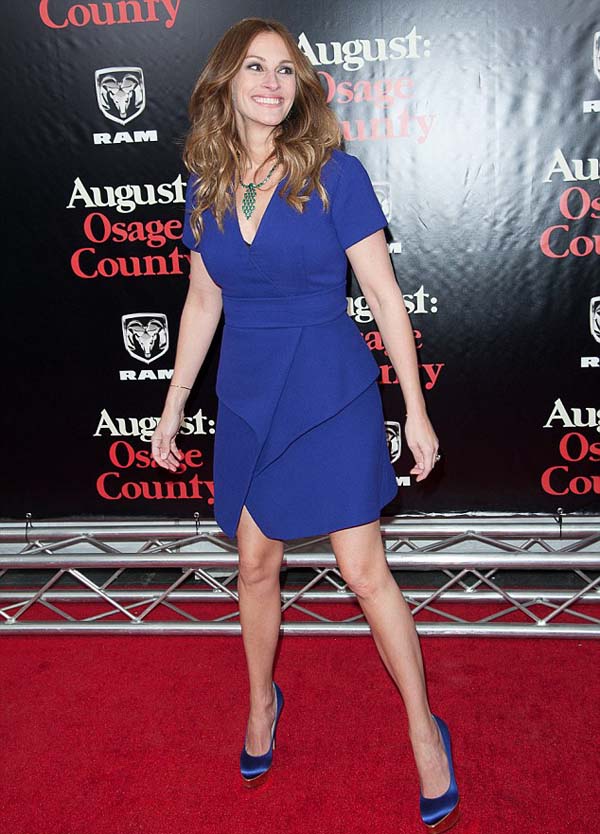 The 50-year-old scrubbed up well in a smart black pinstripe suit, while he was sporting long hair, presumably for his latest role. Never one to be accused of being a wallflower, co-star Juliette Lewis flashed her black knickers in a daring one-shouldered creation that featured a sheer black pleated skirt with bright pink rose embellishment on the train and bodice. The 40-year-old went for Old Hollywood glamour in the hair and make-up department, with statement bright pink lips and perfectly coiffed curls.  Another star chanelling that era was Abigail Breslin, who looked all grown up in her ruby red fishtail gown. 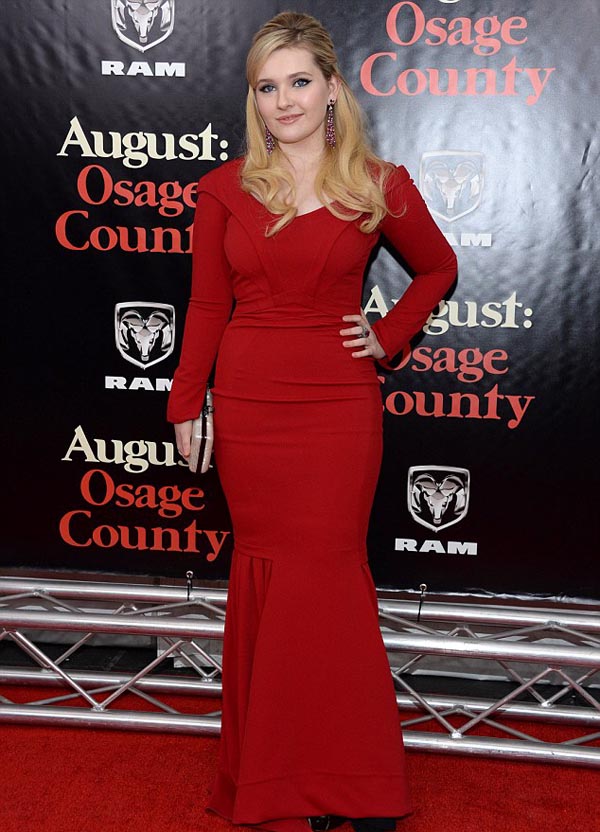 The 17-year-old showed off her killer curves in the form-fitting number, which featured long sleeves, while she wore her hair in a classy half-up, half-down style with voluminous crown and sideswept fringe. Dark, smoky eyes with winged liner and nude lips completed her sophisticated look. Granted, it may have been cold outside, but designer Zac Posen looked far from runway-ready in his odd ensemble. The 33-year-old would have looked just fine in his royal blue suit, black shoes and brown shirt worn over a green turtleneck had he not pinched a ladies’ jacket and gloves on his way to the event. 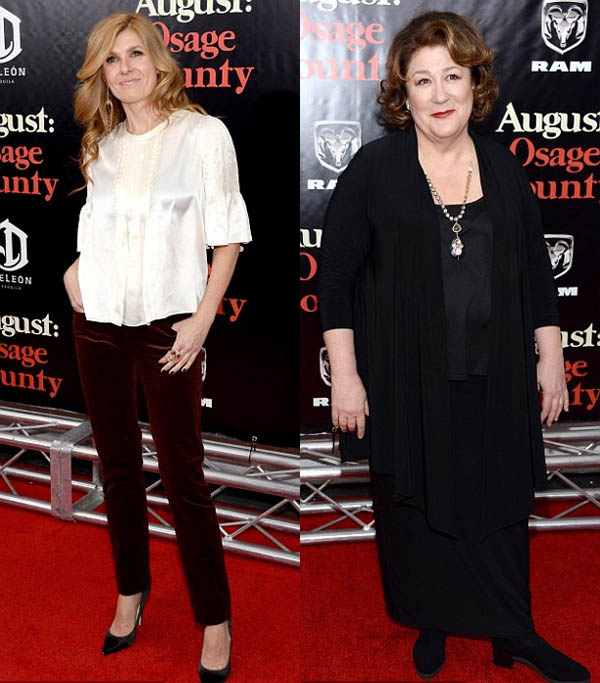 The fashionista looked like he” draided his eccentric great aunt’s wardrobe with the unflattering brown coat with toffee-coloured fur collar and matching leather gloves. Victoria’s Secret stunner Lily Aldridge chose to brave the cold, baring her Supermodel pins in a short cream lace dress with long sleeves and sheer neck detail. Scarlet lips matched her pointy stilettos, while she wore her long brunette locks in soft waves over one shoulder. The mom-of-one made it a family affair, as she was joined by husband Caleb Followill, who attended the event with his Kings Of Leon bandmates. 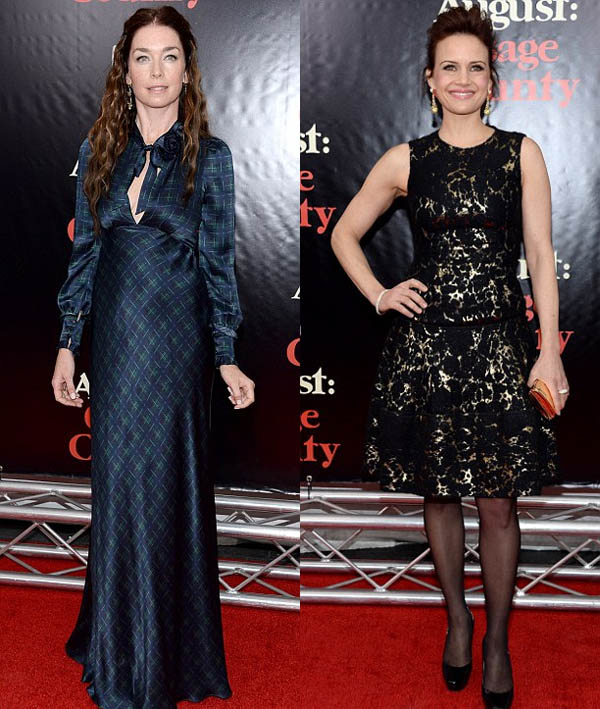 The film, which features an all-star cast including Meryl Streep and Ewan McGregor, hits cinemas in the US on Christmas Day. Earlier that day, Julia Roberts hid her enviable figure under a very loose-fitting coat as she headed to an interview with David Letterman. The stunning star’s dress wasn’t visible beneath her black and grey smock-style jacket, though her killer bare legs were on full display as she made her way inside, sunglasses firmly in place. A short time later, she emerged wearing the same jacket with wide-leg black pants as she headed home to prepare for her movie premiere, still sporting her dark shades despite the sun having already set. -Dailymail