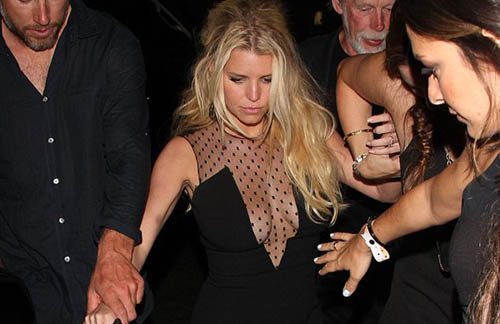 She has shed an incredible amount of weight thanks to a strict healthy eating regime. But Jessica Simpson appeared to let loose on Sunday after months of discipline. The 33-year-old looked a little worse-for-wear as she leaned on her fiance Eric Johnson and friends for support while leaving Warwick nightclub in Hollywood.

The Weight Watchers spokesperson was somewhat bleary-eyed as she teetered in high heels, leaning on her former NFL star beau. Despite appearing a little weary, the star put her sensational figure on display in a daring sheer frock. The skintight mini dress showcased her athletic legs, and the sheer panel at her bust put her ample cleavage on display. The fashion mogul wore her long blonde hair wavy in a tousled half updo. Jessica sported a sultry smokey eye and pink lipgloss, enhancing her natural beauty.

The mother-of-two kept close to her fiance as he held onto her wrist, while a female friend held her other hand, and yet another placed a supportive hand on her back. Jessica is believed to have upped her standard daily cardio to six miles a day on the treadmill as she endeavors to whip herself in the best possible shape when she finally walks down the aisle, allegedly on July 4. ‘Jess probably spends half the day there…She’s incredibly proud of the way she’s stayed on track,’ an insider told Life & Style.

The reality star – who weighed 210 pounds at her heaviest – has whittled her weight down to a solid 110 pounds. The source continued: ‘Jessica has gotten her best body ever. She truly feels like she’s in better shape than she was in her early 20s.’ Jessica has stuck to her meal points and does squat-and-lunge sessions with fitness guru Harley Pasternak ‘three to five times a week.’ ‘A lot of her sensational new look has to do with how happy she is with her family life,’ the source added. ‘She set out to get the best body of her life – and she’s accomplished it.’