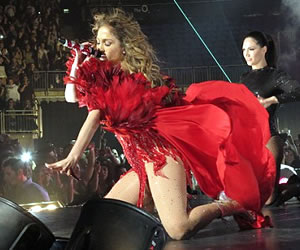 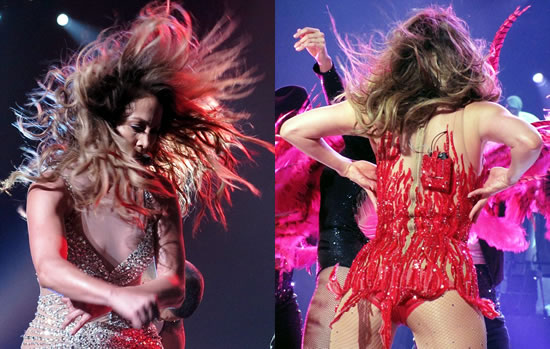 Jennifer Lopez made sure it was a night to remember for the thousands of fans that attended the triumphant London 02 Arena show on Monday night. The 43-year-old singer pulled out all the stops during the dazzling show, including a number of spectacular costume changes. The most daring was the plunging Zuhair Murad bodysuit that has been a mainstay of her Dance Again world tour

Lopez wowed the thousands of people that attended her latest leg of her tour – thanks to countless uptempo dance routines, gyrating choreography and the costume changes. The singer dominated the arena, and covered almost every inch of the huge stage as she danced the night away. Backed by her dancers, she also received able support from a giant big screen, which featured archive footage from past rap collaborators Ja Rule, LL Cool J, Fat Joe, Lil Wayne and Pitbull – and touching home footage of the singer’s children.

At one point the screen showed Lopez and her toyboy lover Casper Smart, 25, on a park bench hugging each other. With the show threatening to get a little bit emotional, the singer shouted to the adoring crowd: ‘Enough of this lovey dovey stuff, gimme some funk.’ Her hit filled set included Love Don’t Cost A Thing, Get On The Floor, Waiting For Tonight, Jenny From The Block and a slowed down version of Love Don’t Cost A Thing. 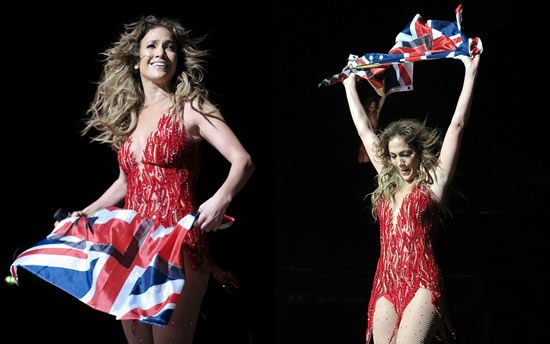 Her many, many costume changes includes a princess-style gown, a glittery gold tracksuit with matching bra top, a bright red leotard, a glitzy black suit, a huge feather dress and a short sparkly blue outfit. Not only did she impress with her energized dances, she banged on the bongos for one uptempo track, draped the Union Jack flag over her and even managed to flash THAT derriere.

You would be forgiven for thinking she would need a long rest after that performance, but she seemed remarkably refreshed as she headed back to her hotel with Casper. The kind hearted singer even took time to sign autographs for her fans. – Dailymail

Where has Melania Trump gone? How the former First Lady spent the year 2021