James Bond is set to return to India for the first time in nearly 30 years, after the government granted filming permission for the latest installment of the fictional superspy’s adventures.

The last time a Bond film was on location in India was for the 1983 hit “Octopussy”, with Roger Moore in the lead role. It was shot in the northern states of Uttar Pradesh and Rajasthan.

An official at the films division of India’s information and broadcasting ministry told AFP permission to film the movie was granted on August 25.

And India’s railways ministry confirmed the makers of the as-yet untitled movie, currently known as “Bond 23”, had applied to shoot in Mumbai, Ahmedabad and the resort state of Goa.

Shooting is planned for February and March next year, said Chandralekha Mukherjee, railway executive director of publicity, rejecting reports that the ministry had denied permission to film a sequence on the network.

“There’s no dispute. The only issue is that we can’t obviously stop trains and inconvenience passengers,” she said.

“The only issue now is to decide what are going to be the points where the shooting will happen. We’re looking into it.”

“Bond 23”, to be directed by Oscar-winner Sam Mendes, is due for release in November 2012.

It is one of 22 films by foreign studios which have been cleared to shoot in India in 2010-11.

Others include a film adaptation of Mohsin Hamid’s novel “The Reluctant Fundamentalist”, “Trishna”, British director Michael Winterbottom’s version of

Thomas Hardy’s classic “Tess of the d’Urbervilles”, and “Life of Pi”.

“The Reluctant Fundamentalist”, by US-based Indian director Mira Nair, is in pre-production, while “Trishna”, starring “Slumdog Millionaire” actress Freida Pinto, is in post-production.

“Life of Pi”, based on Yann Martel’s novel, is due for release next year, according to the imdb.com web site. 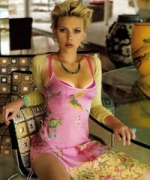 Is This The Moment Lovebirds Calvin Harris and Taylor Swift First Met?