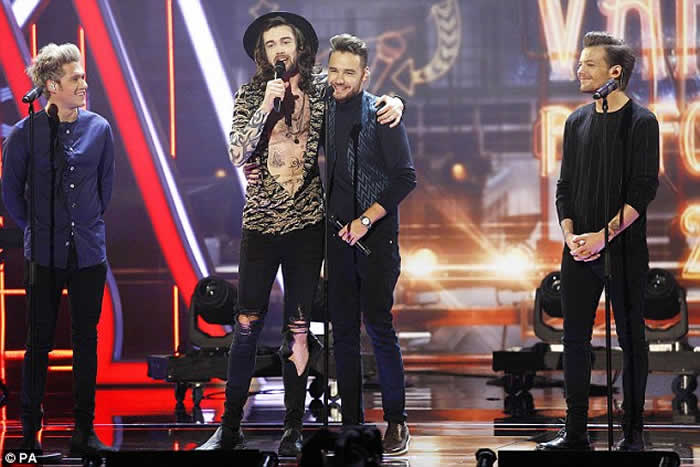 They became a four piece after Zayn Malik’s shock departure in March. But offering to fill the void, Jack Whitehall gave his best impression of Harry Styles as he hosted the 2015 Royal Variety Performance.

In a bid to join One Direction, the 27-year-old comedian was almost unrecognisable as he rocked an unbuttoned shirt, distressed jeans, a fedora and a set of hair extensions.

He questioned: ‘I was just wondering, obviously you lost a member, and then decided you were going to take a break. But if there was someone around who was willing to step in, might that be a decision you reconsider?’ Joking that Jack didn’t quite fit the bill, Liam Payne, 22, quipped: ‘Maybe if you shaved your chest a little bit.’ The Bad Education star then replied: ‘Don’t dig out the chest there, mate. I would be taking this from a boyband to a man band.

That, my friend, is called puberty’. While performers from around the world, including Little Mix Ricky Martin, The Corrs, Josh Groban, The Killers front man Brandon Flowers all take to the stage. There will also be a rare appearance from Jeff Lynne’s ELO, and Britain’s Got Talent winners Jules, Matisse and Friends will put the controversy of their win behind them in the spotlight.  As well as Whitehall, viewers can look forward to comedy from Romesh Ranganathan, Chris Ramsey and Matt Forde, as well of a water-based acrobatic routine from Cirque Du Soleil.