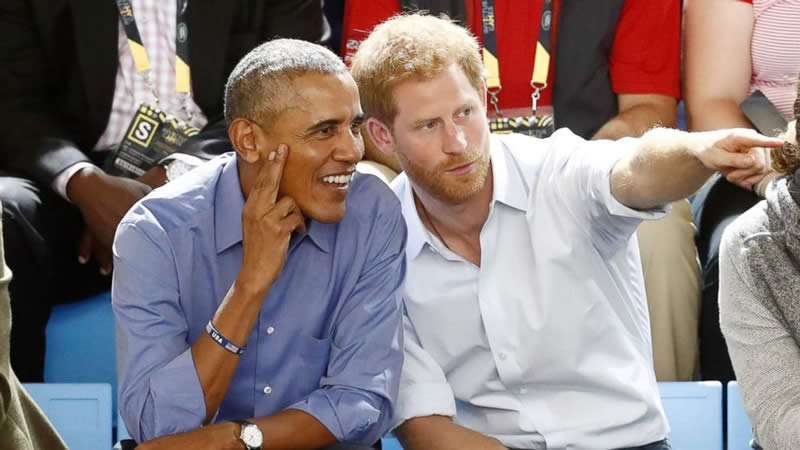 Prince Harry and Meghan Markle might be following in the Obamas’ footsteps—at least that’s one royal expert’s theory.

In an interview with 9Honey, royal expert and biographer Katie Nicholl shared her predictions for the Sussexes’ future—which she thinks will be modeled after the path Barack and Michelle Obama have taken since leaving the White House. Here are some highlights from Nicholl’s interview.

On why Harry and Meghan are emulating the Obamas:
“The Obamas’ Higher Ground [production company] was always going to be the business model for the Sussexes and that’s exactly what we’re seeing. They are just emulating in each step of what they’re doing and that is because the Obamas’ model has worked.

It’s high end, it’s aspirational, it sits very much with the image that the Sussexes are trying to curate for themselves and it’s a successful business model. So why wouldn’t they look to that for inspiration? I think that’s exactly what they’ve done.”

On what the next project the Sussexes will announce will likely be:

“I certainly think books are going to be on their agenda. Meghan’s a big fan of self-help books herself, she’s a writer, she loves writing — I mean, look at the piece she wrote for the New York Times. So I think it’s very, very likely that they will move into books, or certainly Meghan particularly.”

On what a “tell-all” book from Meghan would—and wouldn’t—cover:

“Whether you’re going to see a tell-all on life in the royal family is another matter altogether. Whatever they do, it’s important to remember they are still bound by that pledge to the royal family, to uphold the values of the monarchy, to remain respectful of the monarchy whether or not they are working members of the institution.

So I think self-help manuals, healthy living, wellness, that’s all likely genres the Duchess might want to dip her toe in. But I definitely think writing and a book deal is very possible indeed.”

On the Obamas’ role in helping shape the Sussexes’ post-royal lives:

“I wouldn’t be surprised if they had had talks with the Obamas, they are friends and the Obamas have done exactly what the Sussexes are hoping to achieve. I’m sure there’s been some mentoring and possible guidance along the way, but I think whether or not they’ve had conversations, it’s obvious in the way they’re working, Harry and Meghan are using this as a model for themselves, they’re using the Obamas’ business structure as a template.”

KUWTK: Why Kanye West Will Be So Much Happier Without Kim Kardashian