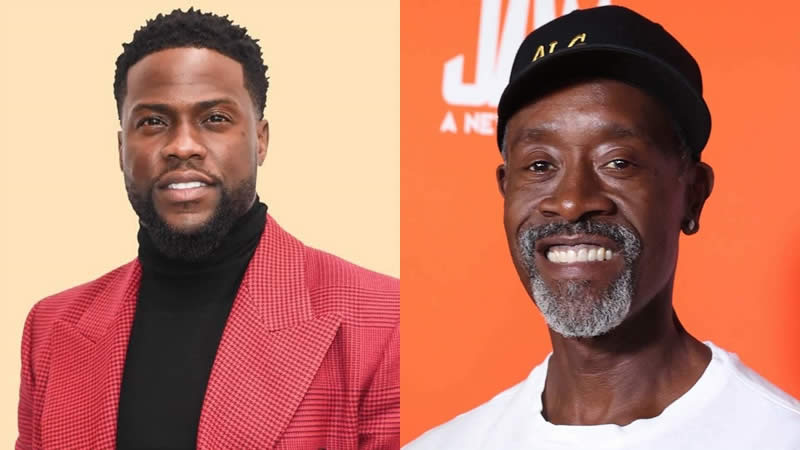 Don Cheadle set the record straight after a viral clip from his conversation with Kevin Hart went viral and supporters rushed to his defence.

A sneak-peek clip of Cheadle, 56, and Hart, 42, addressing generational wealth on Thursday, August 12 revealed the comedian’s unfiltered reaction to knowing his guest’s age.

“Damn!”, while interrupting the Marvel actor’s speech about a wider matter, Hart said during his new Peacock talk show, Hart to Heart. Cheadle took a brief pause before continuing the conversation, leading some to believe that the Iron Man 2 star was upset by the remark.

Cheadle took to social media after the video went viral to explain that he was not offended by the exchange.

A fan asked Cheadle, “What went through your mind at the moment?”

The actor tweeted back, “😂😂😂 that @KevinHart4real and I need to do a movie together asap! I think this is my favorite interview ever. ‘Damn! 😂😂😂.’”

The Missouri native also “liked” a few posts on how amusing the conversation’s focus on that particular topic has been.

One tweet read, “This @KevinHart4real and @DonCheadle interview on #HartToHeart is one big laughter. That one clip circulating is one the tip of the iceberg.”

Another social media user wrote, “Man, I feel for ya Don. This is crazy, some people have no sense of humor at all! I must have watched that clip 100 times and it’s still hilarious.”

The host later added: “I can sit up here and honestly say, ‘Buddy, that that was from a place of love.’”
Cheadle, for his part, took the remark in stride throughout the segment.

The Space Jam: A New Legacy actor explained during the episode, “It’s fine. We’ll take a poll on how you meant it with people here later after the show’s over.”

As per the report of US Weekly, since the video went viral, the actor of Jumanji: The Next Level has made it clear that the incident was all part of the fun of his new show.

On August 14, Hart responded to a fan who said the moment was “a joke” with a tweet:
“It was a joke champ…. we are both improving with one another and going with the flow…. this is what we do!”

A Rare Philippe Dufour watch sold for a record $ 7.3 Million

Victoria Beckham Keen On Sons To Take Up Fishing

Prince Harry And Meghan Markle Are Following the Obamas’ Footsteps