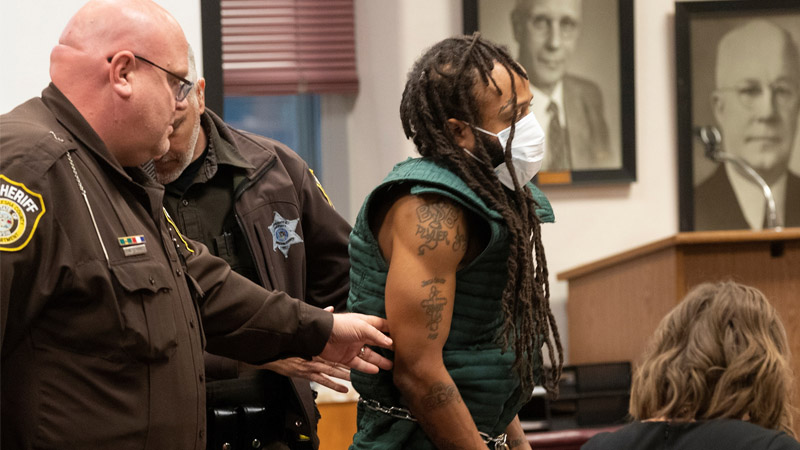 Darrell Brooks, the man who plowed his SUV into a Christmas parade in Waukesha, Wisconsin, last November, killing six people and injuring dozens more, was found guilty on six counts of intentional homicide on Wednesday.

The verdict ends a dizzying trial in which Darrell Brooks represented himself, unsuccessfully arguing that he did not intentionally murder his victims.

The jury began deliberations on Tuesday and arrived at a decision by Wednesday morning. Brooks, 40, now faces a mandatory life sentence in prison.

District Attorney Susan Opper used Brooks’ failure to slow down after running over his first victim as proof that he intended to kill in her closing arguments.

Video of the incident was shown in court, and prosecutors reportedly fought back tears as they watched Brooks mow down families who were out celebrating.

Brooks was caught on the spot. He initially pled not guilty due to mental illness but withdrew his plea in September.

The trial, which began on Oct. 3, became even more bizarre when Brooks fired his public defenders and chose to represent himself.

Brooks’ defense was erratic, with him clashing with Judge Jennifer Dorow every day. Brooks had to be removed from the courtroom and escorted to a separate room equipped with a video stream at times due to his behavior.

The verdict comes less than a year after Brooks murdered an 8-year-old boy and several members of a “Dancing Grannies” group on Nov. 21.

Brooks had been released from jail on $1,000 bail just two weeks before the attack after allegedly running over a woman. Prosecutors later admitted that the bail amount was “inappropriately low” for the alleged crime committed.

Prosecutors claim Brooks drove as fast as 30 mph when he plowed down his victims during the parade, striking 68 people in total.

Brooks also questioned the court’s jurisdiction over his case, which it did, and frequently interrupted or spoke over Opper and Dorow.

“He continues to not respect the fact that a ruling has been made, and he wants to argue and reargue and reargue points that this court has already gone over,” Dorow said Tuesday, as Brooks insisted the case continue longer.

Brooks made his closing arguments in person on Tuesday, claiming that his SUV had been recalled due to a throttle malfunction.

“Throughout this year I’ve been called a lot of things,” Brooks said in his closing remarks. “And to be fair I am a lot of things. A murderer is not one of them.”

Opper shot back: “You need to look in the mirror, Mr. Brooks. Your actions are that of a murderer.”

“Burn in hell you piece of shit,” the heckler was captured screaming.