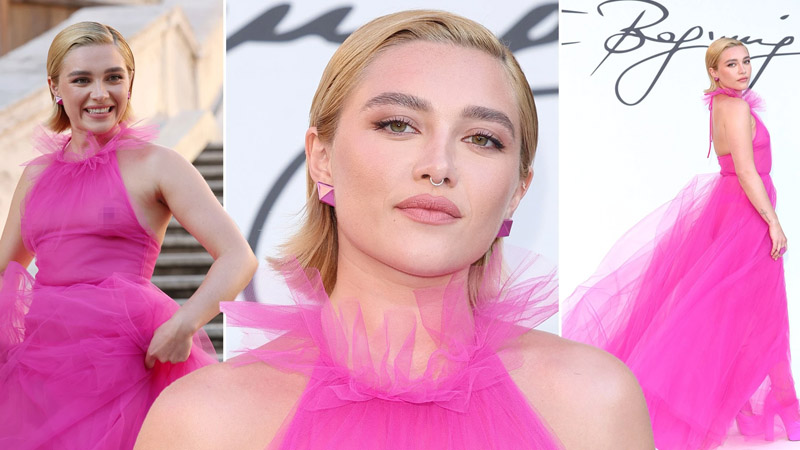 Social media has provided us with new and exciting opportunities to interact with celebrities in recent years. If you want to know about celeb beauty treatments, makeup products, and fashion preferences, go no further than social media. The most astute of these celebs understand how and when to seize the spotlight.

Enter Florence Pugh, who stunned in sheer dresses numerous times in 2022 (and later used her social media platform to express her views on “freeing the fucking nipple”). Now she’s back for the holidays, looking stunning in a crimson dress.

On Christmas Eve, the Don’t Worry Darling star shared the look with her fans, or “scoundrels,” as she referred to them. She complimented photographer Josh Shinner for capturing the amazing moment in her Instagram post. Take a peek at this head-to-toe stunner.

Pugh wore the outfit earlier this month to the 2022 Fashion Awards. Valentino designed her gown, while Tiffany & Co. provided her jewelry. However, the red carpet shots from the London-based event do not do the looking credit in the same way that these photographs do.

Of course, the tweet has already generated a slew of responses from other celebrities, including some in the fashion industry. Pugh is an “absolute goddess,” according to designer Harris Reed. Cary Brothers, a singer-songwriter, termed it an “insane shot.” WWE star Zelina Vega shared my thoughts, adding, “Wow, just wow.” Pier Paolo Piccioli, the creative director of Valentino also reached out to the actress via the message, wishing her a “Merry Christmas.”

Meanwhile, Zendaya was recently declared to have the biggest fashion moment in 2022 after unveiling a new ‘do and also flaunting several major fashion styles this year. I’m not sure why Florence Pugh didn’t even make the Top 20. She had a viral fashion moment in Rome, she rocked Barbicore to perfection and her Don’t Worry Darling fashion choices from press days were huge hits. At one point, Pugh even got away with wearing a cape! Many people try capes. Few people succeed.

Kim Kardashian made the list despite being mocked lately for an outfit she wore to a Christmas dinner. I’m not knocking Kim; I’m simply stating that our girl Florence was robbed. At the very least, with her new style, she’s going out with a bang as we approach 2023.

Trump declares himself ‘clairvoyant,’ critics wonder how he managed to get the election so wrong