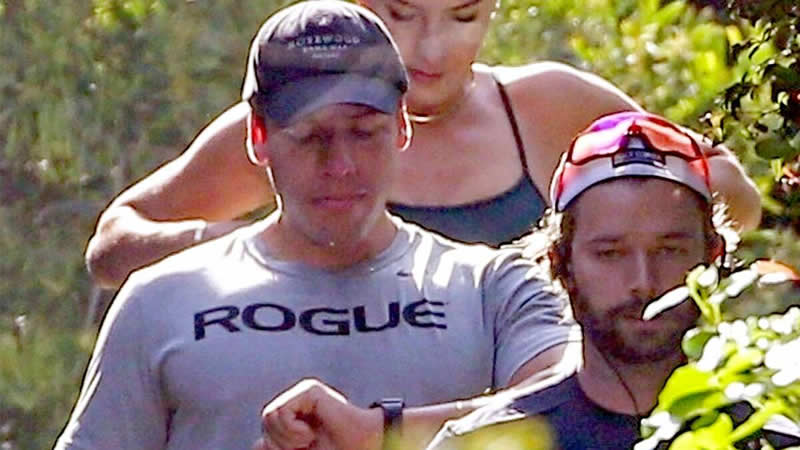 Nothing like a little workout to bond with your bro.

Patrick Schwarzenegger seems to be making an effort to develop a relationship with his half-brother, Joseph Baena.

Arnold Schwarzenegger’s sons were spotted working out together at the Santa Monica stairs on Monday, April 5, in their first photographed public outing together.

Patrick, 27, and Joseph, 23, were joined by Joseph’s girlfriend, Nicky Dodaj, for the fitness activity. Nicky, who is getting her MBA at Pepperdine, posted a picture of the famed wooden stairs on her Instagram Story, along with the caption, “LFG!” to stand for “let’s f–king go!”

It’s been seven years since the Los Angeles Times revealed Arnold had an affair with his housekeeper, Mildred Baena, and fathered her child, Joseph, in 1997.

About five years after the birth, Arnold ran for Governor of California and took office in 2003. The Terminator star left the governorship in 2011 and then told his wife, Maria Shriver, of his secret paternity. She filed for divorce the same year.

Mildred continued to work for the family until her retirement in January 2014.

Arnold said in a statement to The Times that year, “I understand and deserve the feelings of anger and disappointment among my friends and family. There are no excuses and I take full responsibility for the hurt I have caused. I have apologized to Maria, my children and my family. I am truly sorry.”

He is also dad to Katherine, 31, Christina, 29, and Christopher, 23, who was born just five days before Joseph. Arnold got a new title—grandpa—when Katherine and hubby Chris Pratt welcomed Lyla Maria Pratt last year.

Today’s workout wasn’t the only family time Patrick’s had lately. He and his girlfriend, Abby Champion, spent Easter weekend with his mom in Palm Springs, Calif.

Both he and Joseph are getting more involved in the acting biz, with Patrick recently starring in Moxie, Daniel Isn’t Real and Midnight Sun.

On the other hand, Joseph will soon appear in his big debut, The Chariot, alongside Rosa Salazar, per IMDb. The fitness guru has been learning jiu-jitsu and appears focused on training, even recreating one of his dad’s iconic bodybuilder poses.

Though today’s outing is the first public sighting for the brothers, Arnold has spent time with Joseph on his own. The pair rang in Joseph’s 19th birthday in Germany at Oktoberfest in 2016, and celebrated his graduation from Pepperdine University in 2019.

“Great student, great athlete,” the Predator star wrote on Instagram. “I’m proud of you and I love you!”

Mildred also indicated she has kept it cordial with Arnold. When The Times published its exposé, it did not print Mildred’s name but quoted her as saying, “I wanted to achieve my 20 years, then I asked to retire.” She reportedly got a severance payment and “left on good terms with them,” as she put it.

It seems that the scandal is all water under the bridge now, as Patrick and Joseph are hanging out and making up for lost time.