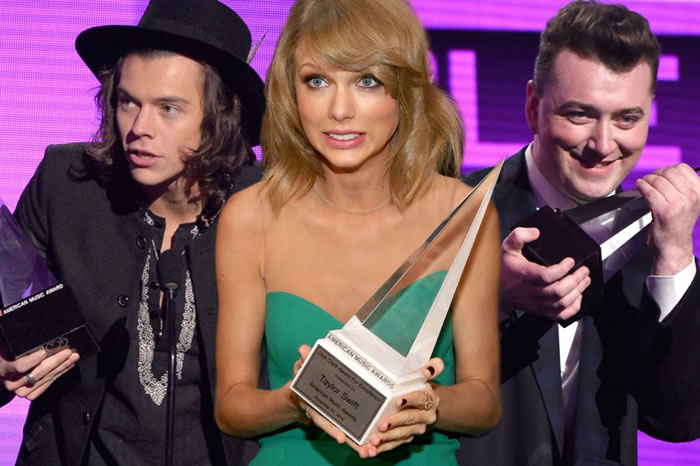 An absent Taylor Swift dominated the American Music Awards, winning three prizes, including album of the year and song of the year.

One Direction also fared well, being named favourite group and artist of the year, for the second year in a row. Jared Leto made a moving speech about terror attacks in Paris, recalling the time his band played at The Bataclan.

Celine Dion then sang Edith Piaf’s Hymne a L’Amour against a backdrop of Parisian landmarks. “Tonight we honour the victims of the unimaginable violence that took place in Paris and around the world,” said Leto, who sings with rock band 30 Seconds to Mars. “France matters. Russia matters. Mali matters. Syria matters… The whole world matters. Peace is possible.”

The Paris attacks were very much on the minds of the other performers and nominees. Singer-songwriter Charlie Puth said he had been in Paris a few weeks before the attacks and was heartbroken by the news. Ashton Irwin of 5 Seconds of Summer, said the attacks “will change what we write about in the future”. “We have a young fan base, and were almost the communicators of what’s going on in the world.”

However, the rest of the awards show took a less sombre tone. Host Jennifer Lopez opened the ceremony with an extended dance routine, set to a medley of the year’s biggest hits – including Mark Ronson’s Uptown Funk, Taylor Swift’s Bad Blood and Drake’s Hotline Bling. Audience members Nicki Minaj and The Weeknd, whose songs were included in the mix, looked somewhat bemused by the honour. Alanis Morissette performed her breakthrough hit You Oughta Know, which turns 20 this year, accompanied by Demi Lovato; while Charlie Puth and Meghan Trainor locked lips at the end of an impassioned performance of their duet Marvin Gaye.

ARTIST OF THE YEAR

NEW ARTIST OF THE YEAR

SONG OF THE YEAR

COLLABORATION OF THE YEAR

10 Fitness and Diet Tips From Male