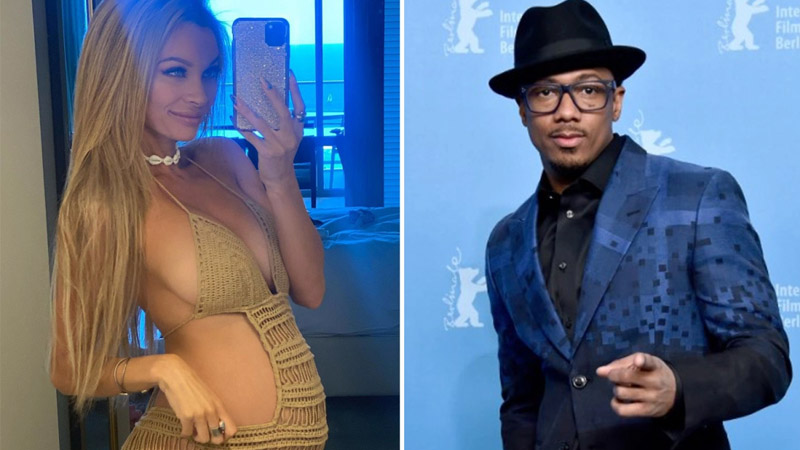 The model recently sparked speculation the ‘Masked Singer’ host was the father of her unborn child when she revealed in a now-deleted pregnancy photo that she planned to name her son Zen S. Cannon and she’s now marked Father’s Day on Sunday (20.06.21) by sharing a photo of them together, with the topless presenter cradling her bump at the beach.

Although Nick, 40, was facing away from the camera, his identity was clear from his tattoos.

The heavily-pregnant model – who wore a dark blue dress in the photo – wrote on her Instagram Story: “Celebrating you today [heart emoji]”

The new baby will be Nick’s fourth in just six months as he and Brittany Bell welcomed daughter Powerful Queen into the world in December, and Abby De La Rosa recently gave birth to twins Zyon and Zillion.

Abby announced she and Nick – who also has son Golden, four, with Brittany, and 10-year-old twins Moroccan and Monroe with ex-wife Mariah Carey – had welcomed their twins into the world just a few days ago.

The 30-year-old DJ took to Instagram to post a sweet video of her cradling the newborns in the hospital bed, which she captioned: “JUNE 14TH, 2021. Welcome to the world Zion Mixolydian Cannon & ZIllion Heir Cannon #Myworld #twinboys (sic)”

Abby also posted a close-up of her baby’s teeny hands on her Instagram Story.

Abby announced they were expecting twins in April.

She wrote: “Our dearest sons – my miracle babies,

Thank you for choosing me to be your Mommy. I know the Lord has destined me and prepared me for the gift of not one but two little angels. I pray that God give you both the strength to walk brave and boldly in your individual truth just like your Daddy. That God bless you and your brother and guide you into living out your full purpose. Your Dad & I will always be here for you both; in complete unison and support. No matter what this world may throw your way, know that forgiveness is key and what is for you – is for YOU! You both are already so loved and we can’t wait to meet you both (sic)”