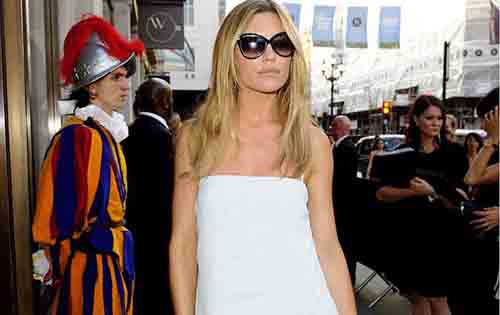 Days after getting into a scrape as she navigated the streets of London, she’s back on the scene and ready to party. Former Strictly Come Dancing star Abbey Clancy was all smiles as she stepped out in a duck egg blue spaghetti-strap sun dress in the British capital on Thursday evening.

The blonde beauty teamed the flattering number with a strappy pair of heels and a white leather clutch purse as she kept her eyes guarded behind a pair of large tinted sunglasses. Abbey Clancy married to footballer Peter Crouch, led the celebrity revellers attending the Watches of Switzerland store launch, and as she posed for pictures, her troubles of last week appeared to be far from her mind.

The 28-year-old model was joined at the bash by the likes of model Daisy Lowe, actor Dougray Scott and All Saints singers Melanie Blatt and Nicole Appleton. Last week, Abbey Clancy had to deal with a fender bender after a removal lorry banged into her £80,000 Mercedes vehicle. She nevertheless got down to the business of sorting the mess out. After a heated exchange with the driver, she then took photos of his tax disc after the driver couldn’t speak good enough English to be understood.

Meanwhile on Sunday, Abbey posted on her Twitter congratulations to one of her many famous pals. Well done my beautiful @daisylowe on Sunday brunch today talking about your delicious new cool book xx love u’. It’s been a week of highlights for mostly highlights for  Abbey who was also seen heading out for a night in London with her husband Peter Crouch. Abbey and Stoke City star Peter headed to Hakkasan restaurant in the capital with pals and were later seen at Duke Box on Fulham Road. -dailymail

Lady Gaga Flaunts Her Real Self in “You and I”