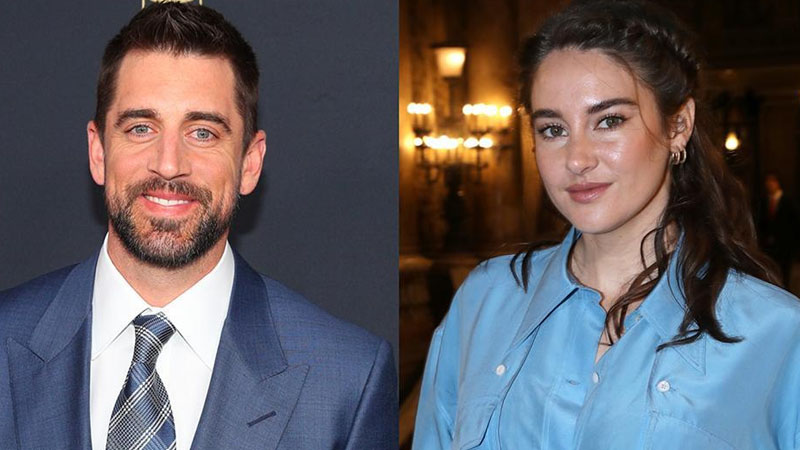 Maybe Aaron Rodgers and Shailene Woodley aren’t so far apart after all. Despite reports that the couple had called off their engagement, the Green Bay Packers quarterback appeared to clear the air while discussing happiness.

Rodgers stated he’s been “thriving at home” on Tuesday’s The Pat McAfee Show before calling out Woodley, whom he refers to as “Shai.” The athlete mentioned a speech he gave last week after winning his fourth NFL MVP award, as well as a conversation he had with head coach Matt LaFleur.

“I was teasing with Matt before when I mentioned in my speech that three years together, two MVPs there are no coincidences. And I also was telling Shai, I’ve been with you for two seasons and won two MVPs, like, that’s not a coincidence either and I mean that” Rodgers shared.

“When your home life is stable and you have an amazing partner to do life with, it just makes the work-life a bonus… how much more fun can I have at work now, now that the stress of personal life stuff is out of there.”

“I know for me, it’s been great the last two seasons to have that stability at home and I think about the other wives of my teammates who are just rockstars,” he added. “When things are good in your personal life… it allows you to just relax and be so much more grateful, I think, for the little things in life. Big shout out to all the women backing up the fellas.”

Rodgers found himself in the heart of a media firestorm over his vaccination status in November. The quarterback did not receive the COVID-19 vaccine and had to sit out one game after contracting the virus, although publicly declaring himself “immunized.” After his season ended, he seems to have given some consideration to the scandal.

“One thing I am sad about and definitely apologetic is I didn’t realize in the midst of the COVID conversations how much my situation was affecting my loved ones and my people,” Rodgers declared. “I didn’t realize the kind of shrapnel that was kind of being flaked off what I felt like were the bullets coming at me.”

Rodgers said he “never wanted to be divisive in this whole thing” before apologizing to those close to him, starting with his (maybe) fiancée.

“But I am very sorry to those people — Shai, and my loved ones, and my agents,” he said, noting he recently grasped “the entire gravity” of the situation. “To those people, I just want to say I’m sorry. I never meant to get you in the middle of it… I do have a lot of feelings of remorse for that.

Rodgers’ public comments came only days after many outlets, including Yahoo Entertainment, reported that he and Woodley had broken up. After then, the actress was photographed without her engagement ring on her finger. Whatever the case may be, it’s evident that the star of Big Little Lies is a significant figure in the quarterback’s life.

Rodgers shared an intimate photo with Woodley on Monday night, though it appears to be an old photo. She was one of many “special people” he recognized in an appreciation message.

“Thanks for letting me chase after you the first couple months after we met, and finally letting me catch up to you and be a part of your life,” he wrote. “Thanks for always having my back, for the incredible kindness you show me and everyone you meet, and for showing me what unconditional love looks like, I love you and am grateful for you.”

Woodley has not publicly commented on the split reports or Rodgers’s recent public declarations.