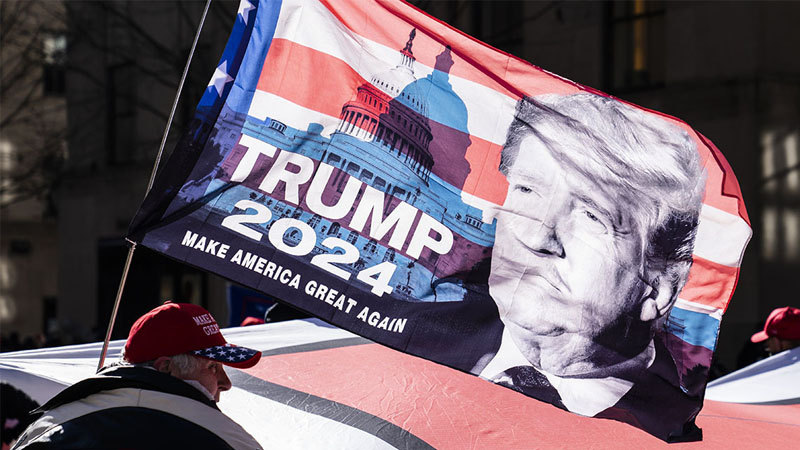 His return to the electoral battlefield this weekend is the kickoff for a summer of rally stops designed to keep his base engaged for the midterms — and any possible comeback bid.

Defeated presidents usually go away — at least for a long while. Not Donald Trump.

Trump returns to the electoral battlefield Saturday as the marquee speaker at the North Carolina Republican Party’s state convention. He plans to follow up with several more rallies in June and July to keep his unique political base engaged in the 2022 midterms and give him the option of seeking the presidency again in 2024.

“If the president feels like he’s in a good position, I think there’s a good chance that he does it,” Trump adviser Jason Miller said in a telephone interview. “For the more immediate impact, there’s the issue of turning out Trump voters for the midterm elections.”

And, Miller added, “President Trump is the leader of the Republican Party.”

The set of advisers around Trump now is a familiar mix of his top 2020 campaign aides and others who have moved in and out of his orbit over time. They include Miller, Susie Wiles, Bill Stepien, Justin Clark, Corey Lewandowski and Brad Parscale.

While his schedule isn’t set yet, according to Trump’s camp, his coming stops are likely to include efforts to help Ohio congressional candidate Max Miller, a former White House aide looking to win a primary against Rep. Anthony Gonzales, who voted to impeach Trump this year; Jody Hice, who is trying to unseat fellow Republican Brad Raffensperger as Georgia secretary of state after Raffensperger defied Trump and validated the state’s electoral votes; and Alabama Senate candidate Mo Brooks, according to Trump’s camp.

Trump’s ongoing influence with Republican voters helps explain why most GOP officeholders stick so closely to him. Republicans spared him a conviction in the Senate after the House impeached him for stoking the Jan. 6 Capitol riot, House GOP leaders have made it clear that they view his engagement as essential to their hopes of retaking the chamber, and Rep. Liz Cheney, R-Wyo., was deposed as Republican Conference Chair this year over her repeated rebukes of Trump.

A Reuters/Ipsos poll released May 21 showed that just 28 percent of Republicans think Trump shouldn’t run for president in 2024, while 63 percent of Republicans say the last election was stolen from him. At the same time, Trump’s approval ratings among the broader public are anemic. He was at 32 percent approval and 55 percent disapproval in an NBC News survey of adults in late April.

Those numbers suggest that Trump could be in a strong position to win a Republican primary but lose the general election in 3½ years. A former Trump campaign operative made that case while discussing Trump’s ambitions.

He “will have a hard time building an infrastructure to win the general election,” said the operative, who insisted on anonymity so he could speak without incurring Trump’s wrath. “He could win the primary on his name alone. … The problem is building a coalition of people among the light-leaning Republicans and independents.”

Trump alienated many voters with harsh, divisive talk during his presidency and, more recently, with his false proclamations that the election was rigged.

“He would completely have to make a pivot of 180 degrees on his rhetoric,” the operative said. “He would have to change and ask forgiveness.”

Trump also faces legal jeopardy, which could waylay a third bid for the presidency.

Only one president, Grover Cleveland, has ever lost a re-election bid and come back to reclaim the White House. In modern times, one-term presidents have worried more about rehabilitating their legacies by taking on nonpartisan causes — Democrat Jimmy Carter by building housing for the poor and George H.W. Bush by raising money for disaster aid, for example — than about trying to shape national elections. But Trump retains a hold on the Republican electorate that is hard to overstate, and he has no intention of relinquishing it.

Trump lost the popular vote by more than 7 million last year — and the Electoral College by the same 306-232 result by which he had won four years earlier — but he got more votes than any other Republican nominee in history. And it would have taken fewer than 44,000 votes, spread across swing states Georgia, Arizona and Wisconsin, to reverse the outcome.

Republicans, including Trump allies, say it’s too early to know what he will do, or what the political landscape will look like, in four years. A busload of Republican hopefuls are taking similar strides to position themselves. They include former Vice President Mike Pence, who is speaking to New Hampshire Republicans on Thursday, an event that the Concord Monitor called the kickoff of the 2024 race.

Potential Republican candidates include Florida Gov. Ron DeSantis; former Secretary of State Mike Pompeo; Nikki Haley, the former U.S. ambassador to the U.N.; and Sens. Tom Cotton of Arkansas, Josh Hawley of Missouri, Rick Scott of Florida and Marco Rubio of Florida. But for most, if not all, of them, the equation begins with the big “if” of a Trump run, because, as the former Trump operative said, each would be running as some version of “Trump lite.”

For now, said Brad Todd, a Republican consultant whose clients include Hawley and Scott, Trump’s calculation won’t change what the other possible candidates are doing.

“The best time-tested way to run for president in three years is to bust your tail for your party in the midterm,” Todd said. “None of that changes because of the specter of a potential Trump candidacy.”

That’s basically what Trump is doing.

Republicans lost the House in the 2018 midterms, when Democrats were mobilized and Trump voters weren’t, and he would like to demonstrate what he can do to help the GOP this time around.

“We saw that drop-off in 2018 and how that hurt, and we have to make sure that these folks are engaged and energized,” Miller said, “and that people who have gotten on board with President Trump’s movement … come back out in the midterms and stay energized in case President Trump does run in 2024.”

Trump told Fox News’ Sean Hannity this spring that when it comes to the midterms push, “we’re all in.”

And as for a comeback bid in the election cycle that follows: “I am looking at it very seriously,” he said. “Beyond seriously.”

Revealing Memories of George H. W. Bush — Including How Secret Service Carried Him to Say Goodbye to Barbara

The Cutest Celebrity Couples at the 2018 Emmy Awards