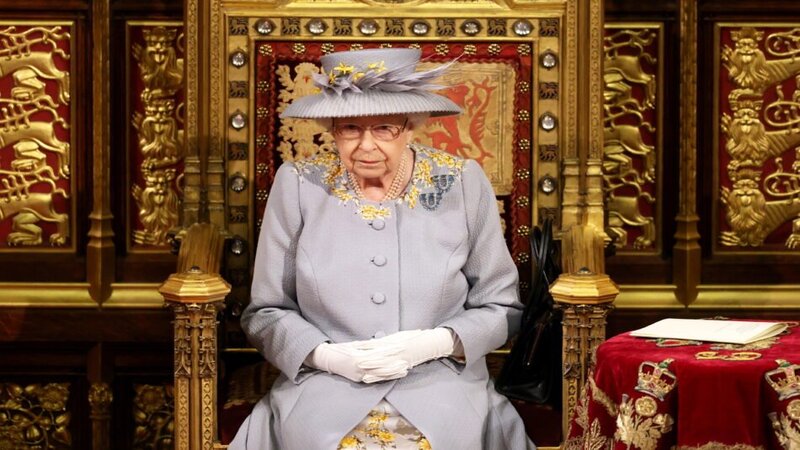 The Queen wore day dress and hat instead of her ceremonial robes as she led a scaled back version of the state opening of parliament in her first major royal duty since the death of her husband.

The 2021 opening was affected by coronavirus restrictions as MPs and members of the House of Lords gathered in Westminster to begin a new parliamentary session.

The Queen, 95, would usually wear special robes and in years gone by, wore the Imperial State Crown as she read the speech setting out what her government would do in the coming months.

However on Tuesday she opted for a pale lilac coat with yellow floral embroidery around the collar, and a matching lilac hat – simple day dress as she wore in December 2019 when she last attended a state opening.
The crown was placed on a cushion nearby, as it has been for several state openings. She last wore the two pound 13 ounce crown during the 2016 opening.

What else was different in the 2021 opening?

Reduced attendance
Instead of the usual 600 or so attendees, there were just 108 people, including the Queen, at the opening.

That also included Prince Charles, his wife Camilla, the Duchess of Cornwall, Commons speaker Sir Lindsay Hoyle, prime minister Boris Johnson and leader of the ppposition Sir Keir Starmer, representatives from the House of Lords and House of Commons and those involved in the ceremonial procession.

There were 17 MPs and 17 members of the House of Lords there.

No diplomatic or non-parliamentary guests were invited, and all guests had to wear masks.

Those who were able to attend had to present a negative COVID test before they could have a confirmed spot.They were selected by ballot.

No carriage procession
The Queen would usually arrive in much pomp and ceremony, in a carriage, travelling from Buckingham Palace to the Palace of Westminster.

But on Tuesday she travelled in a Rolls Royce instead.

There were no military street liners or lining of the Sovereign’s Staircase and no military band nor guard of honour outside the Palace of Westminster or as part of the procession from Buckingham Palace.

And there were no heralds in attendance, only two yeomen and gentlemen at arms, just one bishop representing the group of 26, and only the lord chief justice and the head of the Supreme Court representing the judges.

A Queen alone
Unlike in previous years, there was only one throne for the Queen’s speech.

Usually the consort’s throne is next to the Queen, and was the seat of Prince Philip for decades during the state event.
In recent years, Prince Charles has sat there.

But following the death of Prince Philip, the Queen’s throne was the only one, with Charles and his wife Camilla sat on different seats to one side.

No speech handover
Usually the Queen’s speech would be given straight to Her Majesty, passed over to her by the Lord Chancellor, who is currently Robert Buckland.

However to avoid contact this year, the Queen’s Speech was left out for her before she arrived.

This was the 67th state opening of parliament the Queen has attended in her 69-year reign.

She has only missed two – when she was pregnant with her younger sons, first Prince Andrew and then Prince Edward.