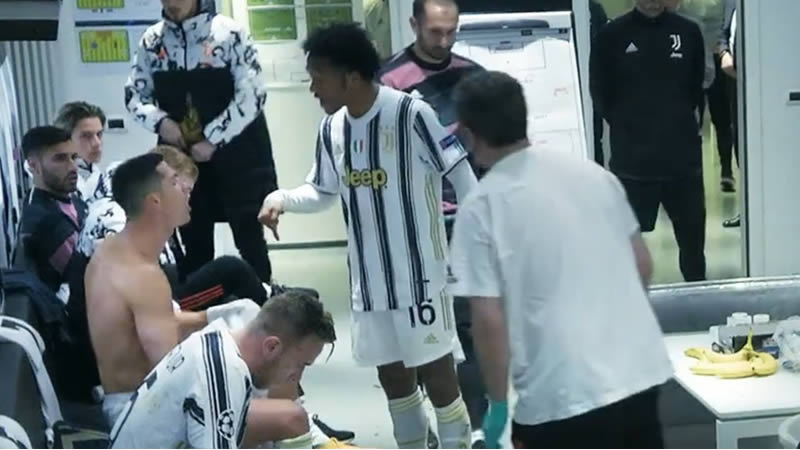 Cristiano Ronaldo was visibly upset during last season’s Champions League match against Porto. He was playing for Juventus at the time, and the dressing room grew heated at halftime.

During the half-time break in the match against Porto, Cristiano Ronaldo and Juan Cuadrado were observed having an ugly argument in the dressing room. It was included in the Amazon documentary All or Nothing: Juventus, which aired recently.

Cristiano Ronaldo was displeased with the situation after Porto went 1-0 ahead at the Allianz Stadium and 3-1 on aggregate. At halftime, he had a verbal confrontation with the rest of the team.

Ronaldo: “We have to work harder. What the f! We didn’t play at all! Nothing!” Cuadrado: “Don’t worry.” Ronaldo: “We played s, always!”

Cuadrado: “You must be an example for everyone”

Ronaldo: “I’m included too. We have to tell each other the truth, we played s***. This is a Champions League match, we need to have personality.”

Andrea Pirlo, the former Juventus head coach, then attempted to calm the situation in the dressing room:

Juventus will go on to lose the tie 3-2.

After growing disillusioned with the club, Cristiano Ronaldo quit the Turin-based team the following summer. After 12 years away from the Manchester outfit, the Portuguese maestro secured a return to Old Trafford.

As per Sportskeeda, Frank Lampard has changed his mind about the Cristiano Ronaldo v Lionel Messi dispute while speaking with Gary Neville. Despite always favoring the Argentine maestro, the Blues icon has suddenly chosen the Portuguese sensation as the best player in the world. Lampard said:

“You know what, I’ve always been a Messi man… and then I watched your debate with Carra (Jamie Carragher) recently. I actually think for what Ronaldo’s output and actual numbers and goals in big finals, and semi-finals like we’ve seen. I think I maybe give him the edge now.”

Last year, Lampard had picked Messi as the best, explaining:

“I’m gonna go Messi on this on pure, natural talent but what Ronaldo has done has been absolutely incredible.”