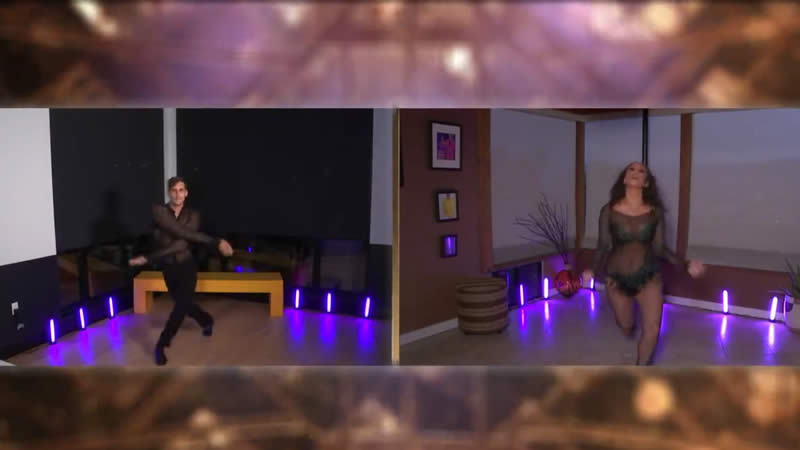 For the first time in Dancing With the Stars history, Cody Rigsby and Cheryl Burke danced separately but together.

After both tested positive for breakthrough instances of COVID-19 on Monday, which was a Britney Spears-themed night, the two performed a jazz dance virtually from their respective homes to the 2007 hit “Gimme More.” Burke, 37, revealed her diagnosis on Sept. 26, while Rigsby, 34, revealed his breakthrough case last Thursday, acknowledging it was news he “didn’t want to be sharing.”

“I’m feeling great but now this comes with a bunch of different setbacks. I’ve got to break down my living room, I’ve got to set up an entire camera setup and I’ve got to learn choreography all from my home,” he said. “If you thought you were going to count me out during Britney night, think again America. If anything I’ve learned from Britney Spears, it’s a comeback baby.”

For their performance, they scored an 18 out of 30. According to host Tyra Banks, Judge Derek Hough was absent due to a “potential COVID exposure.”

“I’ve been waiting 34 years for this performance. I can’t believe I got to do this, I’m just excited,” the Peloton star told Banks virtually.

The professional dancer filmed her at-home hair and makeup process when she was alone in her makeshift ballroom shortly before the concert. She tweeted along with the video, “A day of firsts! Get ready with me… #dwts.”

Rigsby and Burke were absent from the ballroom last Monday, “out of an abundance of caution,” host Tyra Banks said.

The scoring method for Rigsby and Burke later in the show was based on a taped rehearsal in the DWTS practice studio that was filmed “before Burke’s positive COVID test” was known. They received a 24 out of 40 for their salsa.