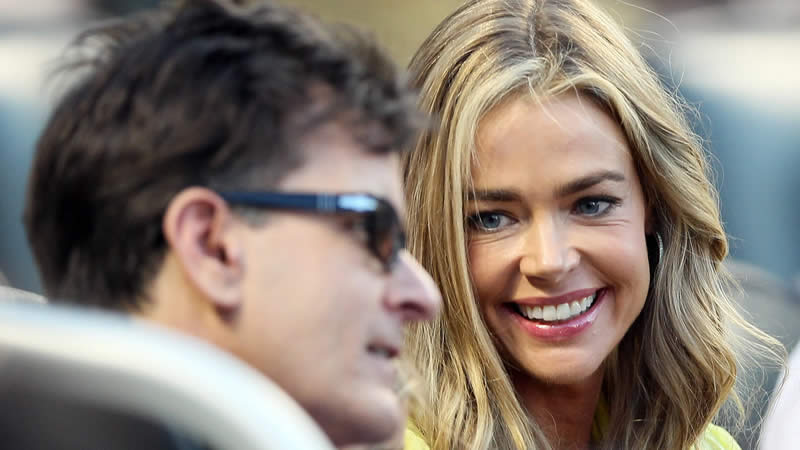 Ever since their disastrous marriage ended, Charlie Sheen and Denise Richards have been taking shots at each other using the media. The latest diss came from Sheen, who insists Richards is trying to swindle him out of his dollars by getting him to overpay for child support.

A judge decided on Tuesday that because one of their daughters moved in with the “Two and a Half Men” actor, he was no longer compelled to pay child support to Richards. Richards was “blindsided” by the ruling.

When approached by paparazzi while shopping at Whole Foods in Malibu, Sheen told Page Six that if Richards disagrees with the verdict, “she should go down to the courthouse and complain to the judge.”

Sheen told Us Weekly after the ruling that he thought it was “extremely fair.”

“It speaks to not just today, but it speaks historically to that same fairness,” he added.

According to People, Richards never served the court date, another source stated the ruling was “very disappointing… but also not surprising.”

Another source said Richards “has known about the court date for six months.”

It seems that Richards isn’t the only one who is upset, as an insider recently told the publication that her husband, Aaron Phypers, is “heartbroken” about the ordeal.

“Aaron’s a kind man. He’s in a tough role, but he keeps his cool,” said the source. “He’s heartbroken because Denise is heartbroken that Charlie is pulling this after all she has done for him.”

They added: “He’s upset because his wife is upset that Charlie is playing this game with the kids.”
The insider explained that Richards is feeling “heartbroken” over the fact that Sheen “has taken this road.”

“She loves those kids,” the insider insisted.

Sheen’s lawyer stated on Tuesday that he has been overpaying monthly to Richards and had set up a $1.2 million trust for his daughters after filing his first petition.

“Sometime in spring, in early April, Ms. Richards had a falling out with her daughters and asked Mr. Sheen to take custody,” Sheen’s attorney told the judge. “That has been the reality since April of this year.”

Sheen’s lawyer suggests that Richards owes Sheen money for the overcharge, but that Sheen has no plans of repayment.