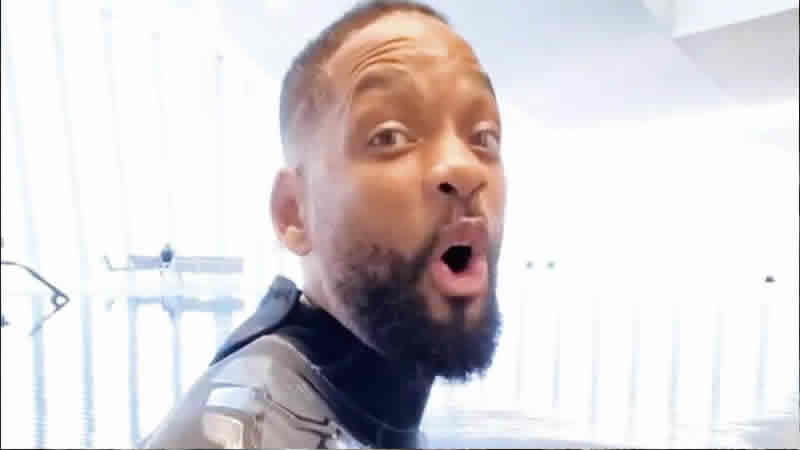 Will Smith took to Instagram to share his latest adventure. “So I’m always in Dubai. But a friend of mine told me I had to check out this pool. There’s something … weird about it,” Will Smith said as the camera panned around to show a tunnel under the water. “Deepest pool on earth. Two hundred feet deep,” Will added before uttering the word: “Madness.” Deep Dive Dubai is the city’s newest attraction and it just opened. The pool features a sunken city for divers of all experience levels to explore. Most of the fans who saw the pool on Instagram commented that it was terrifying and anxiety triggering. You can read the comments on Will Smith’s Instagram.

Deep Dive Dubai describes the experience: “Created for both professional and beginner divers, Deep Dive Dubai is unlike any other pool in the world.Boasting a record-breaking depth of 60 meters, this underwater attraction allows novices to explore in the safety of a controlled diving environment. Filled with 14 million liters of warm water, it opens up new adventures for experienced divers and thrill-seekers who want to go deeper and explore further.”

Inspired by the UAE’s rich pearl-diving heritage of the past, this venture sets new heights (and depths) in the nation’s ambitious vision for an incredible future.” Will was one of the first people to visit as it’s currently operating on invitation only. Will Smith has been known as an action star on film, but through social media, he really has shown the world his life including his thrill-seeking side. Here he is riding a three-wheeled go-kart around the streets of Los Angeles.

But Will Smith has to take his entertainment when he can find the time. He has multiple projects coming down the pipeline including The Council, which focuses on never-before told story of a crime syndicate consisting of seven African-American men who ruled Harlem in the 1970s and early 80s focusing on Nicky Barnes, dubbed “Mr. Untouchable” by the New York Times. Also, he’s starring in Emancipation that tells the story of a runaway slave forging through the swamps of Louisiana on a tortuous journey to escape plantation owners that nearly killed him. In This Joka, Will Smith invites a diverse lineup of up-and-coming, established, and legendary comedians to explore the nature of comedy and its unique ability to bring people together. And those are for 2022 alone.

We can look for a November 19, 2021 release for King Richard. The biopic takes a look at how tennis superstars Venus Williams and Serena Williams became who they are after the coaching from their father Richard Williams. Along with Will Smith, the cast includes Aunjanue Ellis, Jon Bernthal, Saniyya Sidney, Demi Singleton, Tony Goldwyn, and Dylan McDermott

It is scheduled to be released on November 19, 2021, by Warner Bros. Pictures, as well as a month-long simultaneous release on the HBO Max streaming service.

Katie Price Declares to be friend of Leandro Penna