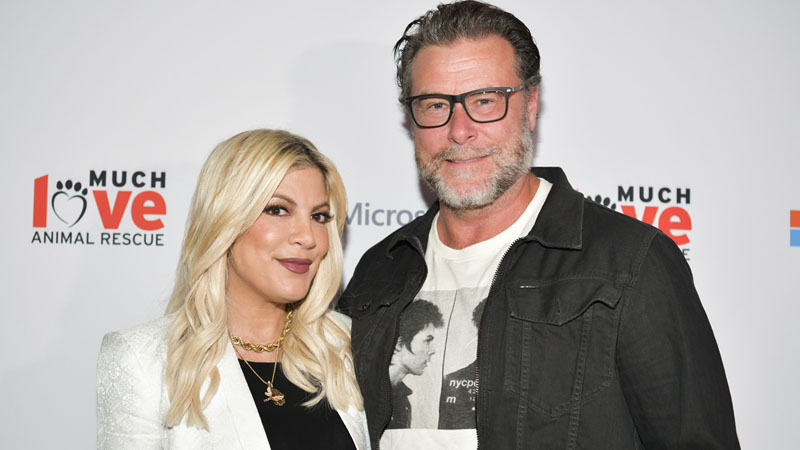 In a sponsored post for Personal Creations, the “Beverly Hills, 90210” alum uploaded photos of herself wearing a green dress and showing off her family’s handmade stockings on Instagram on Tuesday.

“Let’s talk about how to decorate for the holidays! These personalized stockings have won the hearts of both my children and me “In the caption, the 48-year-old actress wrote:

Stockings with “whimsical wintery” characters, such as a snowman, reindeer, and penguins, were shown in the first shot. Spelling held a stocking with her name on it above the fireplace, next to ones with the names of her five children — Liam, 14, Stella, 13, Hattie, 9, Finn, 8, and Beau, 4 — on them.

Spelling revealed the second design, which featured “timeless traditional snowflakes,” in the second image. The actress placed a stocking with her name on it once more, while her children’s colorful goods hung below a garland-draped mantel.

Fans noticed that McDermott, 55, did not appear to be wearing stockings in either photo, prompting one Instagram user to ask, “Where is Dean’s?”

Spelling also released a family holiday card on Monday that didn’t include her hubby.

Spelling is seen holding a chicken while posing with her five children on either side of her. For the session, which also included two goats and a pig, the actress wore a beautiful off-the-shoulder dress and boots.

“Have a wonderful holiday season! From our farm to your home, with love “Examine the card.

Spelling clarified in the comments section of her Monday post that McDermott was not in the photo because he was “filming his new feature film in Canada” at the time. The actress, on the other hand, has been silent about her husband’s omission from their family’s holiday stockings.

During the summer, Spelling and McDermott ignited divorce speculations when they were seen without their wedding bands on separate occasions.

During an appearance on SiriusXM’s “Jeff Lewis Live” in June, the actress intimated that she and her husband, whom she married in 2006, were having marital problems, revealing that she and McDermott were not sleeping in the same bed.

Spelling added fire to the divorce rumors when she was seen holding a notepad with the phrases “custody,” “support,” and “assets” written on it outside a lawyer’s office.

In October, the couple was seen at Disneyland with their children, but neither of them wore their wedding rings.

Hailey Bieber speaks out over problems accepting the cancel culture