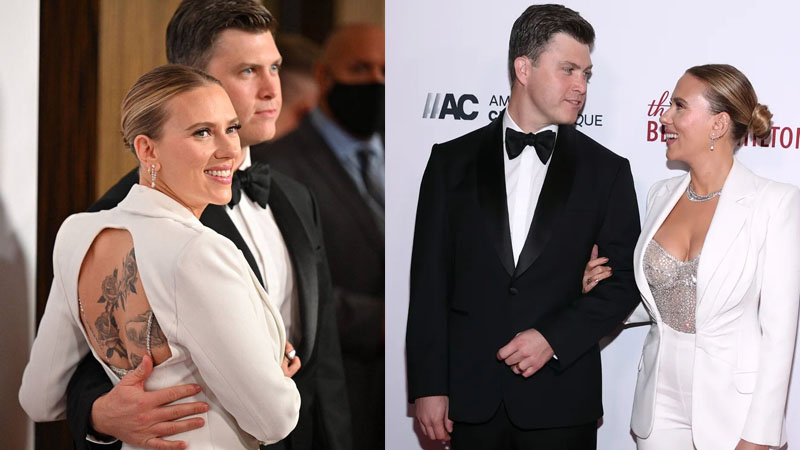 Scarlett Johansson and Colin Jost recently made their red carpet return as the couple made an appearance nearly after 2 years and for the first time since welcoming their son, Cosmo. The couple was stunned in a fashionable look at the red carpet of Cinematheque Awards in Beverly Hills on Thursday, November 18 held at the  Beverly Hilton Hotel.

This marked Scarlett and Colin’s first appearance together since their marriage as well given that the pandemic had brought everything to a standstill and the couple was seen attending virtual events only. At the Beverly Hills event, Scarlett was seen looking her absolute best as she wore a white suit with a bustier top while her husband donned a classic black suit.

Scarlett and Colin posed for adorable photos on the red carpet as the actress held him by the arm and at one point the duo was also seen gazing at each other in the most romantic manner.

Johansson and Jost confirmed in August that they had welcomed their first baby together. Making an announcement on Instagram, the Saturday Night Live head writer said, “Ok ok we had a baby. His name is Cosmo. We love him very much. Privacy would be greatly appreciated.”

Colin’s co-host on SNL’s Weekend Update and good friend Michael Che during his recent appearance on Jimmy Fallon’s talk show spoke about Jost’s baby boy and said that he’s “very cute” as he discussed being open to babysitting and mentioned how he has done it for his nieces and nephews.