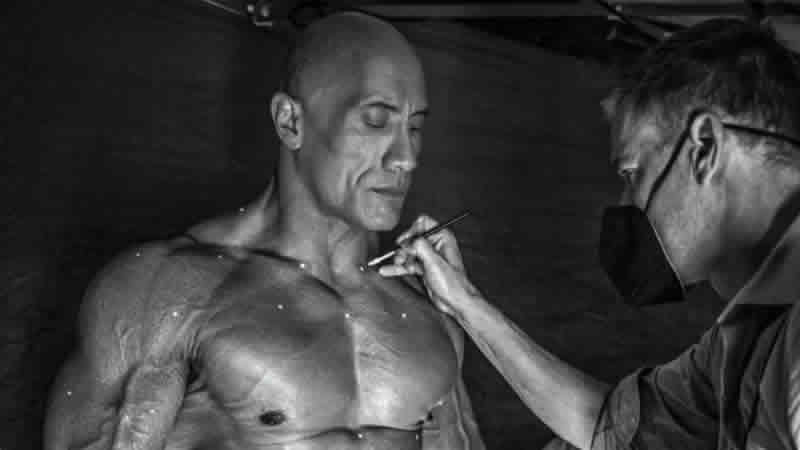 On Thursday, the 49-year-old actor shared a photo of himself that vividly showed his defined muscles as a crew member on his latest film Black Adam drew white dots, or trackers, on his body, which are often used to help the visual-effects team map human motion. In the caption, Johnson gave fans insight into his new role.

“Minutes away from shooting a very cool cutting edge scene for our movie, BLACK ADAM,” he wrote. “My skilled make up artist, Bjoern Rehbein is applying tiny white tracking dots to very specific areas of my body (legs included) so our Visual Effects team track and compute my muscle fibers intensely activating and moving while BLACK ADAM is raging to seek & destroy his enemies.”

He also admitted that working on this movie has been more than a little daunting.

“This is the final week of production and the hard work with my training, diet and conditioning has been relentless – hardest of my career because I’ve had to maintain this physical look for months and had to peak in my final week – but our collective goal is to raise the bar with BLACK ADAM. To deliver the antihero you’ve been waiting for and you deserve. Final week of production. The hierarchy of power in the DC UNIVERSE is about to change. Do not go gentle,” he added.

In the comments, celebrity friends and fans could not get over how ripped Johnson looked as well as their excitement about his new role.

“Years of absolute beast training culminating in one of our craziest sequences yet. DC will never be the same!” a fan said.

“UNREAL! The hierarchy has officially changed!” someone added.

Johnson regularly shares images that show off his insanely sculpted body as well as peeks into his fitness routine. In a May social media post, he shared another update on his training for Black Adam where his massive legs were on full display.

“Been working extremely hard dieting, training and conditioning unlike any other role of my entire career,” he wrote in part. “Manipulating water, sodium, cardio but also having to push and pull real iron to have dense, dry, detailed muscle. It’s a real science that takes months and months to dial it all in with my strength & conditioning coach @daverienzi who keeps a very watchful eye, constantly fine tuning our strategy daily.”

He shared a video late last month encouraging his over 250 million Instagram followers to do Sunday workouts.

Taylor Swift and Jake Gyllenhall Being Pursued by Paparazzi