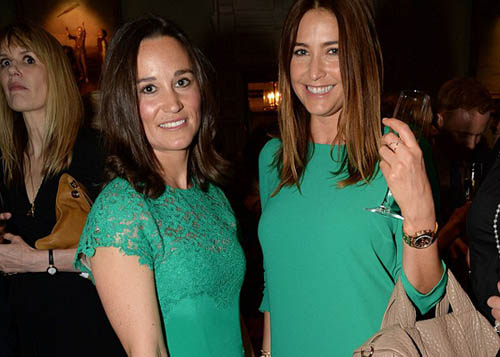 Turning up to an event in the same outfit as someone else is what everyone tries to avoid. However wearing exactly the same shade of green didn’t appear to be too much of a concern for Pippa Middleton and Lisa Snowdon when they arrived at the annual Waitrose Summer Party on Thursday.

The Duchess of Cambridge’s sister opted for a chic lace dress, while radio host Lisa flashed her pins in a thigh-skimming shift, before they both finished off with a pair of pointy nude heels. Pippa Middleton – who writes a column in Waitrose Kitchen, the supermarket’s magazine – kept her famous behind hidden under a short-sleeved number, complete with cap-sleeves. The 30-year-old’s look also included a plain panel around the waist, which she teamed with a simple beige clutch.

She was spotted catching up with TV presenter Ben Fogle and Mary Berry during the star-studded bash held at Lord’s Cricket Ground. Mary, 79, also opted for a spot of lace in the form of a elegant white jacket on the night, which she wore with a black pencil skirt. Meanwhile Capital Breakfast regular, Lisa Snowdon 42, undoubtedly turned heads in her short, long-sleeved ensemble, while carrying a studded handbag.

The former girlfriend of actor George Clooney kept her hair down and straight, while wearing a chunky gold watch. Despite having had an early start, Lisa looked fresh-faced after tweeting: ‘Oh yeah baby!!Sheratan is our last confirmed act for this years Summer Time Ball CapitalSTB’, earlier in the day. In an interview this week, the star admitted: ‘People are always trying to marry me off. Either that or saying that I’m desperate for a baby. ‘

Maybe it’s because a lot of women see marriage and babies as a natural progression, but my life has just gone the way it’s gone. I may have said in the past that men find me intimidating, but that was off the back of ‘the relationship’ [with Clooney]. I actually think I’m pretty approachable.’ Also there in the night was TV presenter Steve Jones, who looked dapper in a navy suit jacket and matching tie.

Despite looking far from summery, Gizzi Erskine wowed in a short black dress, complete with gold detailing along the neckline, which she finished off with her trademark beehive. Rugby player Chris Robshaw and girlfriend Camilla Kerslake was also among the guests at the event, which celebrates the best of British food. –dailymail