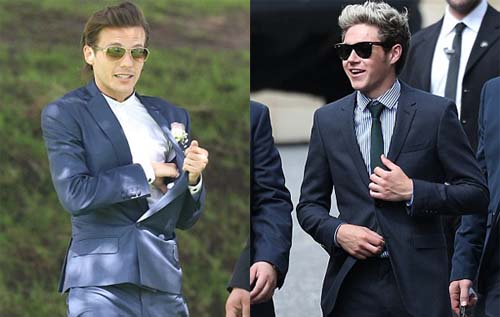 Louis Tomlinson was left disappointed when he found out his Doncaster Rovers FC takeover bid collapsed earlier this week. But he was soon able to focus on more positive moments as he attended the wedding of his mother, Johannah Poulston and Daniel Deakin on Sunday afternoon.

The One Direction singer was joined by his bandmates, Harry Styles, Liam Payne and Niall Horan, but Zayn Malik did not appear to have attended the wedding ceremony in Manchester. Louis looked handsome in a navy suit which he teamed with a crisp white shirt and brown brogue shoes. Shielding his eyes with a pair of aviator shades, the teen heartthrob styled his brown locks into his preferred quiff style for the big day.

His mother looked radiant in a stunning wedding gown which features floral lace detailing. She accessorised with a diamond headband as her brunette tresses were styled into a loose updo. The bride clutched onto a large bouquet and as she made her way out of the church following the ceremony and was seen hugging Louis Tomlinson band mates who took turns to congratulate her. Johannah and Daniel have been together for two years following her split from her ex Mark Tomlinson four years ago when Louis was trying his chances on the X Factor.  The pair are parents to twins, Ernest and Doris, while she is also mother to Felicite Tomlinson, Charlotte Tomlison and Phoebe Tomlinson.

Meanwhile Louis’ long-term girlfriend, Eleanor Candor, was part of the bridal party as she was pictured in her shimmering bridesmaid dress.  The brunette beauty – who just graduated from University – wore her locks in a voluminous half up-do while she highlighted her features with natural make-up. Niall Horan was seen arriving at the reception in a fitted black suit which he teamed with a striped shirt and dark green tie. The Irish hunk completed his look with a pair of Ray Ban shades while his band mate Harry Styles stuck to his distinctive rocker chic style for the day.

Liam Payne was joined by his girlfriend, Sophia Smith, as the pair co-ordinated in black ensembles.The group hair stylist, Lou Teasdale, was also amongst the guests in a chic black trouser suit which helped to make her silver locks stand out even more. Zayn Malik and his fiancé Perrie Edwards did not seem to be in attendance as the guests made their way to the reception to continue on with the celebrations. -dailymail