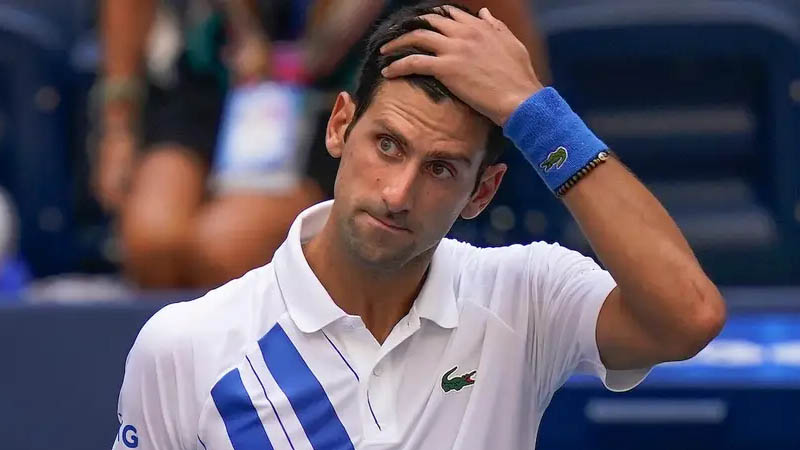 Novak Djokovic, the No. 1 men’s player and No. 1 seed, has been disqualified from the U.S. Open.

In a stunning turn of events on Sunday, the Serbian athlete defaulted from the fourth round of the U.S. Open after he accidentally hit a lineswoman with a ball in a fit of anger. Moments prior, on the second point, he had fallen to the ground after chasing a shot. He was seen clutching his left shoulder.

Djokovic, who was the heavy favorite expected to secure a win in the men’s singles tournament, was down 5-6 in the first set against Pablo Carreño Busta. A frustrated Djokovic walked to the sideline for the changeover when he launched the ball behind him and unintentionally hit the umpire.

The lineswoman was hit in the throat and she dropped to the ground at the back of the court.

Then, Djokovic walked towards her to check on her condition and could be seen visibly shocked after realizing he had hit her.

Officials then discussed the incident for several minutes before making their decision to default Djokovic, who shook hands with Carreño Busta at the end.

“In accordance with the Grand Slam rulebook, following his actions of intentionally hitting a ball dangerously or recklessly within the court or hitting a ball with negligent disregard of the consequences, the US Open tournament referee defaulted Novak Djokovic from the 2020 US Open. Because he was defaulted, Djokovic will lose all ranking points earned at the US Open and will be fined the prize money won at the tournament in addition to any or all fines levied with respect to the offending incident,” the United States Tennis Association said in a statement.

Djokovic’s disqualification guarantees that there will be a first-time Grand Slam men’s singles champion at the U.S. Open. Carreño Busta advanced to the quarterfinals with the default.

It’s been a tough year for Djokovic, who earlier this year also tested positive for the novel coronavirus (COVID-19), and came under fire for organizing a tennis event in Zadar, Croatia, that potentially exposed other athletes to the virus.