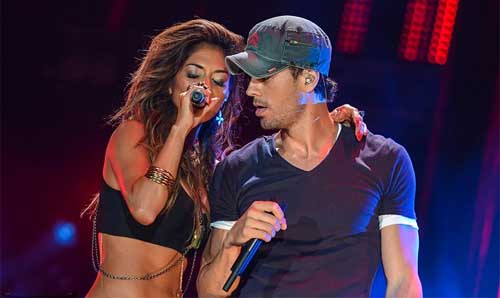 They first put on an amorous display in their video for Heartbeat back in 2010. And not much looked to have changed four years down the line when Nicole Scherzinger and Enrique Iglesias reunited for a surprise duet on Tuesday evening. The former X Factor judge, 35, and her Spanish companion, 39, kept each other close during their steaming performance at Malta’s Isle of MTV.

The former Pussycat Dolls beauty displayed her enviable figure thanks to a racy, all-black outfit, complete with tiny crop top. With her hair worn down in a loose wave, Nicole Scherzinger – who is dating Formula 1 star Lewis Hamilton – teamed her stomach-baring look with sporty leather shorts, complete with lace trim. She soon ditched her strange voluminous jacket as she sang with the Hero hitmaker, before the pair shared a steamy hug. Nicole teamed her outfit with a chunky gold and green body-chain, while sensibly opting for trainers for her upbeat gig.

She later changed her loose-fitting bottoms for a more stylish sequinned pair which sparkled alongside her chunky gold earrings and bangles. During the evening, the star proved she hadn’t forgotten her roots and treated fans to some of her former band’s biggest hits including Jai Ho, Buttons and Don’t You Wish Your Girlfriend Was Hot Like Me, according to the Daily Mirror.  She tweeted earlier in the day: ‘Gettin ready for isleofMTV in Malta. latergram IOMTV’, while sharing a snap of herself rehearsing on stage. While Enrique Lglesias posted a snap of his impressive vista, captioning it: ‘Amazing view from my hotel! malta isleofmtv IOMTV tonight!  more updates in freakoutapp’.

He opted for a very casual look for the show – his third time at the event – teaming a khaki baseball cap with a navy T-Shirt and shiny jeans. Earlier in the day Nicole Scherzinger made sure she showcased her sartorial prowess as she spoke to press on the island about her performance plans. The star made a stylish arrival in black and white palm tree block dress which accentuated her toned figure. She added extra glamour to the look with large white rimmed shades while she elongated her legs with black wedge heels. Her ensemble may be hint of things to come as Nicole revealed she will once again dabble in the fashion world as she tweeted: ‘Our first collaboration was so much fun…Excited to be working Missguidedcouk on an autumn/winter collection! nicolex missguided’.

The online fashion retailer were just as excited to announce news about the collaboration as they wrote: ‘Excited to announce that Missguided will be joining forces with Nicole Scherzinger for an exclusive AW’14 collection!’. Nicole has also taken time out to take part in charitable deeds after working togerther with Unicef on a new campaign. Cycling legend Sir Chris Hoy and herself are two of the star-studded names who will appear in a global fundraising first at the Glasgow 2014 Opening Ceremony on 23 July to help UNICEF save and change the lives of millions of children across the Commonwealth.