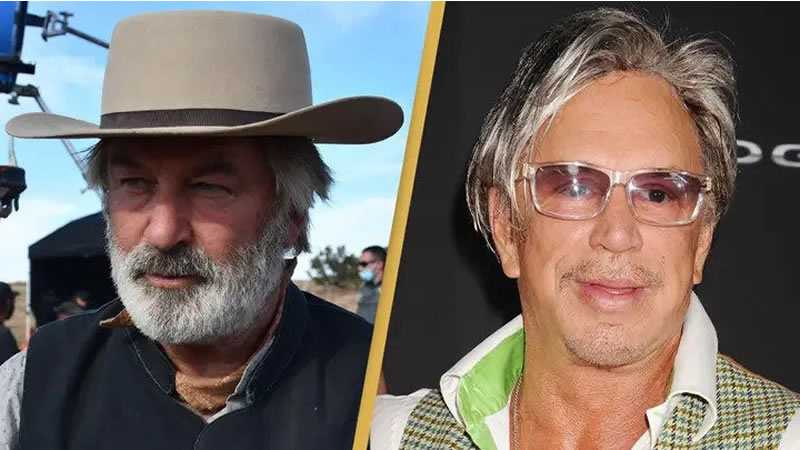 Alec Baldwin was charged with involuntary manslaughter in the death of cinematographer Halyna Hutchins in 2021, according to Mickey Rourke.

The 70-year-old actor turned to Instagram on Friday to express his feelings after New Mexico prosecutors confirmed on Thursday that Baldwin, 64, will face a criminal charge.

According to Yahoo, Hutchins was murdered by a live round fired from a gun held by Baldwin while practicing a scene for the Western film “Rust.”

“I usually never put my 2 cents in about what happens on someone’s movie set,” the Academy Award nominee began the lengthy caption of his post, which featured a photo of Baldwin.

He continued, “It’s a terrible tragedy what happened to a cinematographer Halyna Hutchins. But no way in hell actor Alec Baldwin should be charged with any negligence whatsoever.”

“Most actors don’t know anything about guns especially if they didn’t grow up around them. Alec didn’t bring the gun to the set from his house or his car, when weapons are involved on a movie set, the guns are supposed to be handled only by the ‘weapon armor’.”

The “Wrestler” star went on to explain, “In some cases, the 1st AD might pass a gun to an actor, but most of the time the gun is handed to the actor directly by the ‘gun armor’. There’s what armor’s job is on the set. To have an expert around any type of dangerous weapon.”

“The actor then has an option of dry firing the gun himself or himself to double check. No way in hell should Alec Baldwin be blamed for this unfortunate tragedy. Why ‘the powers to be’ charging Baldwin with this responsibility is terribly wrong? I am sure Alec is already suffering enough over what happened. But to lay blame on him is terribly terribly wrong.”

“With my deepest condolences to Halyna Hutchins, her family, and her friends,” the former professional boxer finished his message.

Hannah Gutierrez-Reed, a “Rust” armorer, is also charged with involuntary manslaughter. David Halls, the film’s assistant director, was charged with careless use of a lethal weapon and agreed to plead guilty in an agreement with the district attorney’s office. He will receive a suspended sentence as well as six months probation.

Halls is accused of giving Baldwin a.45 pistol and telling him it was “cold,” or safe. Gutierrez-Reed had already spun the cylinder to show Halls what was inside the gun, according to her lawyer, Jason Bowles.

Following the announcement of the allegations, Baldwin’s attorney termed it a “terrible miscarriage of justice” and claimed that his client “relied on the professionals with whom he worked” to secure the set’s safety.

“Mr. Baldwin had no reason to believe there was a live bullet in the gun — or anywhere on the movie set. He relied on the professionals with whom he worked, who assured him the gun did not have live rounds. We will fight these charges, and we will win.”

Baldwin was also protected by the Screen Actors Guild – American Federation of Television and Radio Artists. “An actor’s job is not to be a firearms or weapons expert,” SAG-AFTRA stated in a statement on Thursday.

“Firearms are provided for their use under the guidance of multiple expert professionals directly responsible for the safe and accurate operation of that firearm.”

In an interview with The Associated Press, New Mexico First Judicial District Attorney Mary Carmack-Altwies, who announced the charges against Baldwin and Gutierrez-Reed, argued otherwise.

“It is incumbent on anybody that holds a gun to make sure that it is either not loaded or to know what it is loaded with,” she said.

“And certainly then to not point it at someone and pull the trigger. That’s where his actor liability, we think, comes in.”

Carmack-Altwies also stated that, while Baldwin will be charged as the guy with the pistol in his hand, his status as a producer, and at least partly responsible for the lax conditions that resulted in his possession a loaded gun, were factors in the decision to press charges.

Meanwhile, Gutierrez-lawyer Reed’s stated in a statement that they would “bring the full truth to light” and that she would be “exonerated of wrongdoing by a jury.”