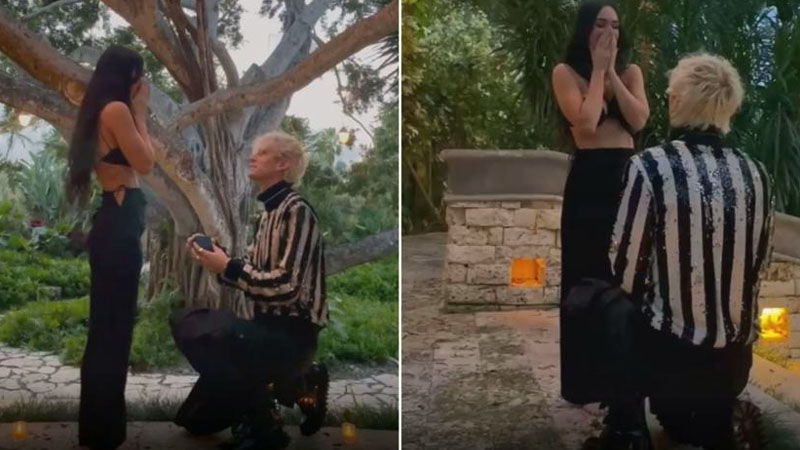 Megan Fox and Machine Gun Kelly are engaged after dating for a year and a half.

The couple shared the huge announcement on Wednesday night on Instagram, with Fox posting a video of his proposal beneath a sprawling banyan tree where she said they met 18 months ago.

“We asked for magic,” she wrote in a caption.

“We were oblivious to the pain we would face together in such a short, frenetic period of time.

“Unaware of the work and sacrifices the relationship would require from us but intoxicated off of the love. And the karma.

“A year and a half later, having walked through hell together, and having laughed more than I ever imagined possible, he asked me to marry him.

MGK, who was born Colson Baker, shared another video to his Instagram, one that showed off Fox’s unique ring that includes a diamond and an emerald, their birthstones.

He wrote in a caption: “I know the tradition is one ring, but I designed it with Stephen Webster to be two: the emerald (her birthstone) and the diamond (my birthstone) set on two magnetic bands of thorns that draw together as two halves of the same soul forming the obscure heart that is our love.”

Their engagement could be considered a full circle moment for MGK, who shared last year that he had a poster of his wife-to-be hanging in his bedroom as a teenager.

As for Fox, who was previously married to actor Brian Austin Green, she said she knew he was her one from the moment they met.

“The second that I was in a room with him and said hello to him and looked into his eyes,” she said, “I knew, because I’m into (astrology), I knew right away that he was what I call a twin flame.”

Last year, Machine Gun Kelly revealed that he wears some of Fox’s blood around his neck – taking a page out of Angelina and Billy Bob Thornton’s book back in the pre-Brad Pitt days.

Fans may recall that Thornton and Jolie – who were married from 2000 to 2003 – famously wore matching oval pendants containing drops of each other’s blood.

Brad Pitt, son Maddox have no relationship, do not see each other: sources