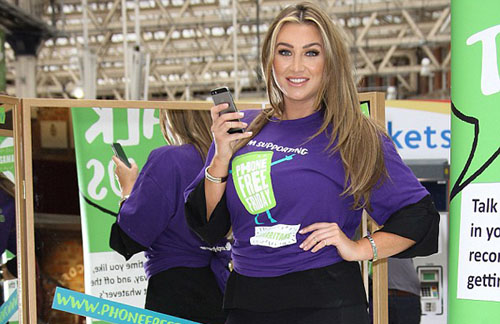 A day rarely goes by without Lauren Goodger sharing a tweet or selfie, so it’s a surprise to see her fronting a campaign which urges phone users to give them up. The reality TV star made her presence known at Waterloo station in London on Monday, to raise awareness for the Samaritans’ Phone Free Friday campaign.

Lauren was there in a charity T-shirt, but her phone was glued to her hand and of course she took a selfie. She also tweeted a message on the way to the event, writing: ‘Morning! Up & out early this morning for samaritans Phone Free Friday Sams Phone Free Great charity, great cause and another beautiful day!!’ Lauren Goodger wore a pair of towering black Christian Lou boutin heels with leggings that proved to be rather see-through when worn.

Though her outfit was on the more casual side for Lauren Goodger, her make-up certainly was not as she opted for heavy eye shadow and foundation with oodles of lip gloss. Speaking about her reason for joining the campaign, Lauren said: ‘My phone is like a second skin; I have it with me all the time and would feel lost without it. ‘Phone Free Friday is a great way to go back to basics by having face to face conversations and making time for people.’ She added: ‘Samaritans is a fantastic cause and I’ll be keeping this in mind every time I fight the urge to turn my phone on.

‘It will be a tough challenge to go without my phone for a whole day, but one that really will make a live saving difference.’ The campaign was set up in memory of Claire Squires, the London Marathon runner who last year died during the race. Phone Free Friday urges those participating to turn their mobiles off from 9am to 5pm on June 20, and if they fail to stay away they agree to pay a £4 donation to the Samaritans – which equals the cost of answering a call to those in need of aid.

10 Most Beautiful Beaches In Africa